While I was at the coast on a Craftacular Getaway, Q spent Saturday brewing a batch of beer from grain with a friend. He's hopefully going to post about that soon - I'll add a link when he does. It did inspire us to take care of old brewing business to make space in the pantry for the newly full 5 gal carboy.
The apple cider has been sitting for quite a while. After it first reached 1.000 specific gravity, we tried to kill the yeast and then added more sugar but we failed and the yeast just gobbled up the additional sugar. We let it sit again until all that sugar was definitely eaten up and then finally got around to bottling it on Sunday. We added 2c water that had been heated with 1/2c sugar then cooled to the 5 gallon carboy to prime it so it will be slightly carbonated. It is quite dry but has a great apple aroma and my sip suggested that it's a pretty decent batch. (Just watch out for the approximate 12% alcohol content!) Here's to 22 bottles of cider I can't drink! ;p 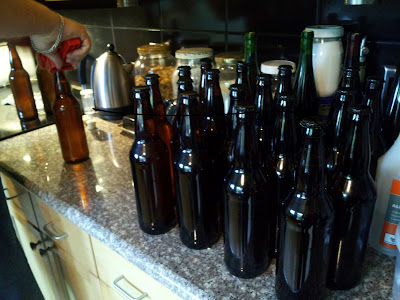 We started the cherry wine on July 12 last year and, after several rackings and several months of procrastination, we got corks and a corking tool from the brew store yesterday. The sip I had suggested the wine is definitely drinkable. It will be interesting to see what a few months in the bottles will do for building character. We're calling it "Christmas wine". 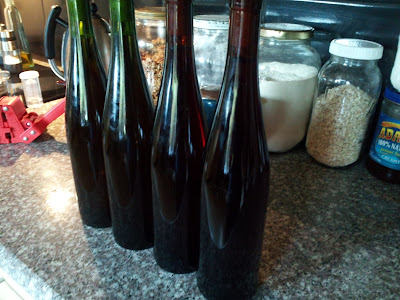 Here's Q with the cats on his first Father's Day. 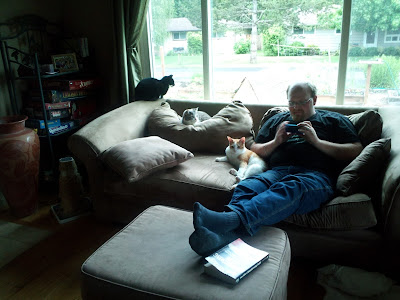