I went down to the media room tonight and found one of the gerbils dead in their cage. Cassidy is no more. Butch seems fine, as well as can be expected for a four year old gerbil. Cassidy was the greedy plump one. In my imagination I suspect that gerbil diabetes contributed to her demise.

I've got a few orders to knit up and have a bunch of stuff I want to prepare for Mom's boutique. I feel like I'm getting sick so I'd better get busy in case I get the flu that's going around.
Posted by Liz at 8:46 PM No comments:

Digit seems to be on the mend and we've been busy, so here are the last few weeks. :) 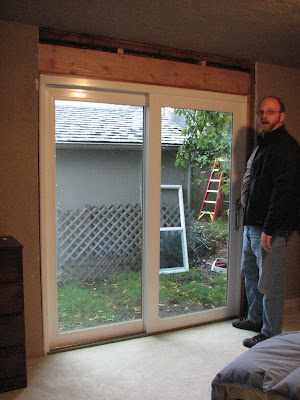 Our new super awesome windows are being installed this week. We had to make one of the windows in the bedroom bigger to meet egress requirements so we decided that while were at it to just put in the sliding glass door we always talked about in there. It's very cool. They're probably going to finish the last ones Saturday morning. Their guarantee is that our climate control bills each month will decrease by at least 40%. 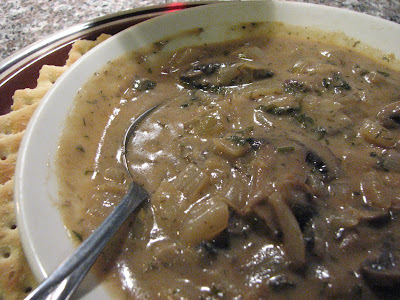 Hungarian Mushroom Soup from Sunday. This is the first time we tried this recipe. It is definitely a keeper - and pretty quick to make. 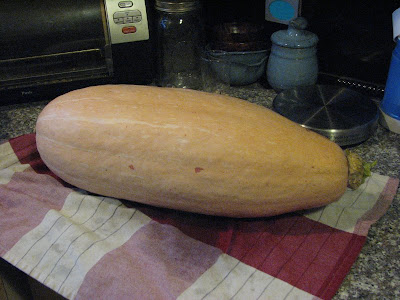 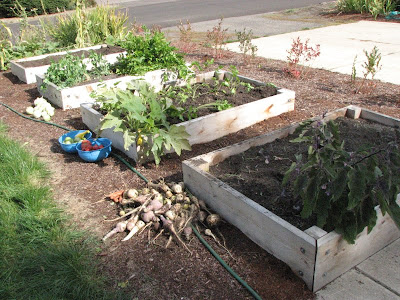 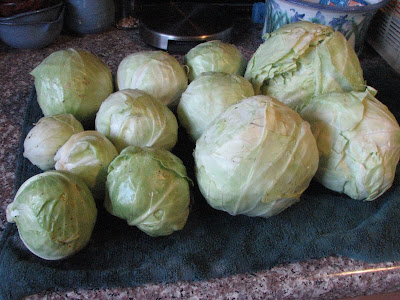 This is the harvest of "early" cabbages. We've still got the late variety out there. They looked like little heads, especially weird since some were about perfect "baby-head"sized. 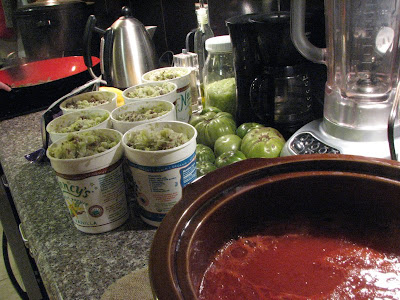 I sauced the last of the tomatoes that I pulled off the plants while I made a double batch of cabbage burger filling. We froze seven quarts of filling. (You can see the jar of sauerkraut I was starting hiding behind the coffee maker. It's in the fridge now. It sure smells like sauerkraut - working up the nerve to taste it!)
Cabbage Burgers
1 lb. ground beef
2 lbs. shredded cabbage
1 medium onion, chopped
1 1/2 t. salt

Brown beef, add cabbage and onion and cook until tender, adding oil if needed. Drain and freeze or use fresh.

We used our first quart of filling for dinner early this week and have had the leftovers for lunches all week. I used the gluten free flour blend for the dough and it worked well, although it had to be a bit thicker than usual - continuing to perfect the combo.When the filling's already made it's a pretty low work meal although letting the dough rise takes time.
Posted by Liz at 8:46 PM No comments:

All's Right With the World 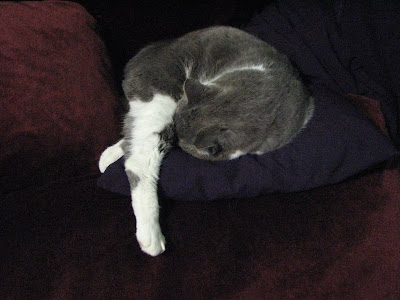 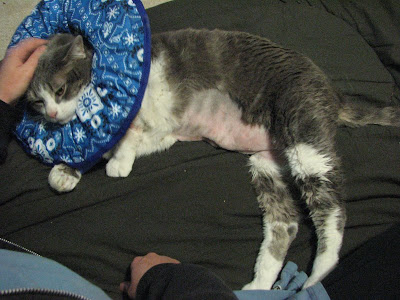 He's got to wear the doughnut any time he's not directly supervised so he doesn't mess with the ten staples in his tummy. A place on his neck (for blood draw?), both of his front "wrists", his tummy up to his chest and the backs of his thighs are all shaved, making him a funny looking kitty at the moment. He's staying in the kitten cage for at least a few days because he's not allowed to jump or play or do much of anything. He's on some powerful painkillers and a round of antibiotics but he's still got a remarkably loud purr. His purring and his chowhound tendencies were remarked on by the vet tech.

Binky keeps sneaking around with her nose wrinkled, not believing that this smelly creature, who smells of the vet office, is her brother. I'm so grateful to have him home. The surgeon seemed hopeful that he could likely go on to live a normal life. And the weekend is starting! Yay!
Posted by Liz at 9:00 PM 1 comment:

Digit made it through his surgery and he's apparently recovering well. I'm so grateful that we can afford what it takes to save our beloved pet and he'll likely be able to have a normal life if all goes as planned. He's going to come home tomorrow if he continues to recover well. He will have been gone for 5 days!
Posted by Liz at 5:30 PM No comments:

My Kitty is Sick 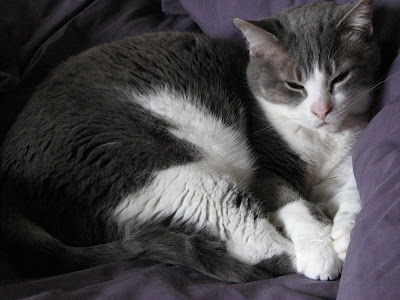 My dear kitty Digit (a.k.a. the best cat ever) is sick and goes in for surgery today. I don't really know if anybody reads this, but if you do, send him your warm thoughts. He has slept on my head every night since he was a tiny kitten. It's been more uncomfortable since he grew into a 12 pound cat but his purring in my ear has always been so soothing. His sister Isabel is trying to make up for it by sleeping and purring on my chest, but I know that we both (and Q) want Digit to come home and get well. I'm sure I'll post more details sometime soon.
Posted by Liz at 7:22 AM No comments:

Possibly one of the cutest things ever. The best part is the way the body and shell are two parts. It is imperative that I make one of these at some point.
Posted by Liz at 6:48 PM 1 comment:

I'm thinking of making a baby hat with this pattern around it. It would decrease in four panels at the top like my Space Invader hats and be ribbed at the bottom. The 84 stitches means it would be a 16" circumference, which meets the baby/toddler head size.
Posted by Liz at 10:03 PM 1 comment:

Two Minutes to Say I Haven't Had Time to Post

Oy! I've been run off my feet for two weeks now. I'll try to sit down later this weekend and even post last week's harvest pictures but don't have the energy right now. I got two hat orders in the last two days so Friday night is going to be a bit of vegging, knitting hats and watching this movie on Hulu. I do love Hulu.
Posted by Liz at 5:21 PM No comments:

Last weekend we had a fabulous time meandering up the coast. We got to visit the Tillamook Cheese Factory and got all the way up to Astoria, which we'd always wanted to visit. The ostensible reason for the trip was to drop the Kansas geocoin up into Washington, which we did accomplish. We visited a total of 8 caches. It was very very fun. There was one at the Cathedral Tree near the Astoria Column that we had just given up on when I spotted it. This stuff is addictive. The photolog of our trip is here, except for the pictures Q took with his phone. Hopefully he'll post them to flickr soonish. 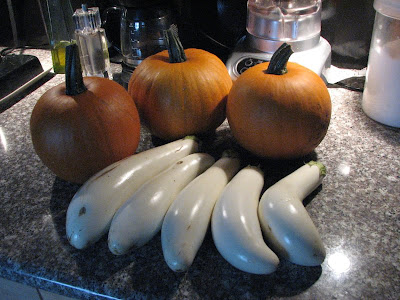 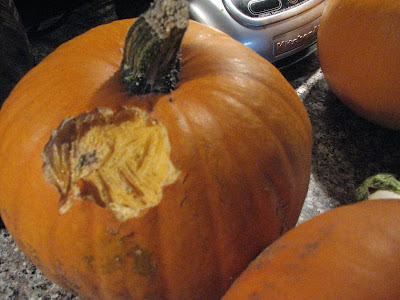 Since then, we've been run off our feet. Working takes way too much time. I was a good girl and put the pumpkins out in the sunny driveway to cure after I picked them. A few days later a squirrel decided to nibble one. I brought them in. Looks like I'll have to bake and freeze the meat instead of keeping them whole for a while.
The garden is in it's last throes of the summer season and my weekend list is long. At the top is breading and frying the eggplants for eggplant parmesan and freezing them. I'm hoping it will be successful - imagine eggplant parmesan as a convenience food. I will feel that I've died and gone to heaven. 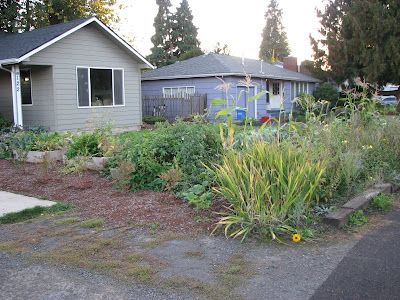 Here is what is hopefully the before weekend picture of the sad yard. I'm hoping to tear out the tomatoes and plant garlic in their bed this weekend. There's lots of other tearing out/harvesting that needs to get done so I can maybe get the beds under a thick layer of winter leaves. 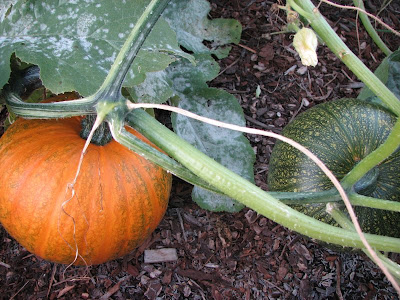 I still have 5 pumpkins that I hope will finish ripening on the vine, so far so good. 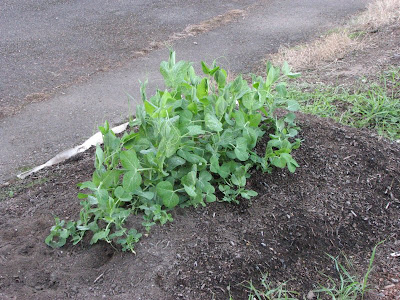 Snow peas, thanks to Mama for leaving some of the seeds here. 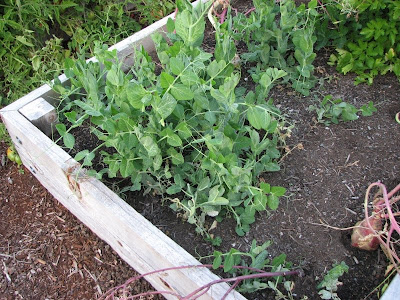 Regular peas. When I made bangers and mash last night, I had to buy local green beans because I didn't have any peas in the freezer. I'm trying to regret eating all of mine raw as lunches this summer but am so far failing. I'll just have to plant more next year. I hope that these manage to get to producing without being frosted. 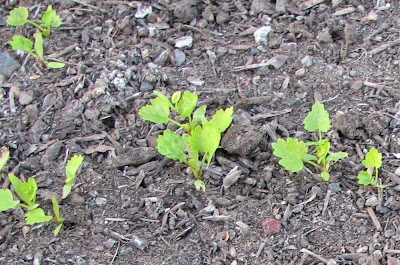 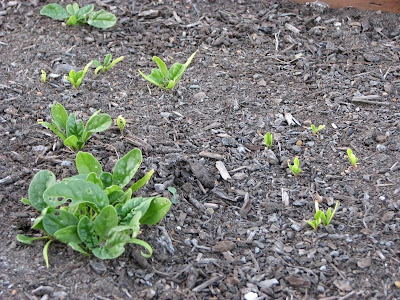 Spinach
I don't know how this winter gardening thing will go but we'll see if I can eke out a second set of cool season crops for the year.
Posted by Liz at 7:16 PM No comments: