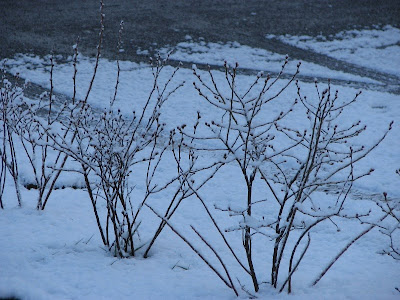 We woke up under a blanket of snow this morning and it's been pretty steadily snowing since then (3 hours). It's pretty stunning and very unlike the Willamette Valley, especially at this time of year. The blueberries have already started getting their leaf buds for this season. I hope this doesn't set them back. 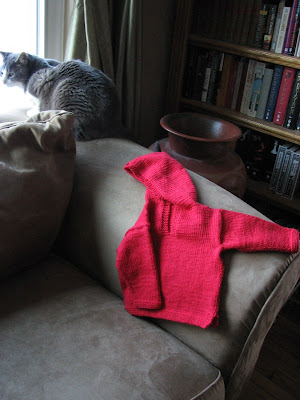 The first baby knitting is done. It became a bit of an imperative urge last week so I rooted around in the stash and the patterns. Having an infant born at the end of summer does put a little cramp into a mommy knitter's potential plans...
This is Debbie Bliss' Hooded Kaftan knit in Touche by Berocco. It's knit using the stitch count for the smallest size (3-6 mo.) but my gauge made it fit the measurements for the 6-9 mo. size, which was what I was after. I'm hoping that a late August Oregonian baby will be able to wear it at least some point during his/her first winter/spring. Since it's a cotton rayon blend it won't be very warm, which allows it to be a layer in our rare super cold weather but also stretches its season out to spring and fall. 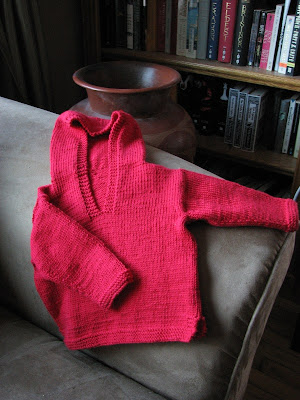 Knitters, if you ever make this pattern I found that I was very pleased by the results of avoiding seams by
1) Knitting the body in the round (after the bottoms were done up to the slit)
2) Not casting off shoulder stitches but using Kitchener stitch to weave them together
3) Not casting off the back hood stitches but keeping them on a holder and picking up the additional 10 stitches at the back when I started hood knitting
4) Not casting off the top of the hood but using my old friend Kitchener stitch to weave the two sides together
5) Knitting the sleeves in the round
With these simple modifications to the simple pattern, I only ended up having to sew armhole seams. To me, avoiding seams (which I do find extremely tedious to sew) also makes garments more comfortable because they aren't as bumpy. 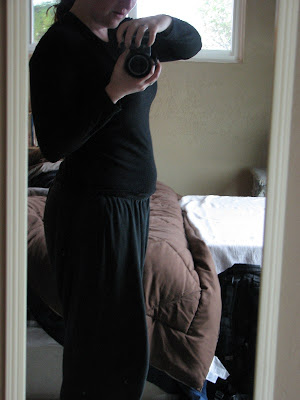 We snuck away to Portland for the weekend as an early celebration of Q's birthday. Priceline was kind enough to find us The Nines, which is way posher than anything we usually do but it was really fun. The Urban Farmer restaurant that it houses is very yummy. We also went to OMSI's Lost Egypt members' night and went shopping at all those big Portland stores. I felt like such a country rube visiting the big city. :)
We got the Manstad couch from Ikea that Q's been wanting for the new media room arrangement. It not only pulls out into a bed but the chaise has tons of storage inside. Pictures forthcoming when the room gets put together. I also got the lambskin I've been wanting as a baby purchase. It's so snuggly that I think I'd be unwilling to share with anyone except my own dear baby.
On a whim we also went to Babies 'R Us to seek a glider. We have been looking everywhere for one and the only ones we've found were ugly or cheap feeling or uncomfortable. The one exception was the local Amish furniture store but that one was so spendy we kept holding back. Say what you will about chains but Babies 'R Us was a glider mecca. We found the ultimate, dream-fulfilling glider. It's tall enough to support Q's head, it's padded enough (including the armrests) that I don't feel totally lost in it and, best of all, wait for it...it reclines and still glides simultaneously. It is seriously the most comfortable experience ever and every other chair we found that reclines no longer rocks or glides when it's in that position. We custom ordered our color/wood combo so it would be here until late April but I'm so excited. Hopefully, it is now clear why it has earned the unique, coveted title, "the regliner". Seriously, seek out a store that carries these, sit in one, and experience the most comfortable experience ever. Mmmmm.....
Posted by Liz at 8:51 PM 1 comment:

No, this is not an announcement...

Posting pictures of sweaters knit for twins when one is pregnant could be taken the wrong way, so I need to be very clear...I am having one baby! This is an order that finally got finished.
The blue doesn't show true to its shade in this picture, it's actually the classic "robin egg blue" one pictures for '50s boy baby showers. I was having tons of camera trouble tonight though, so I was grateful to get a shot at all. 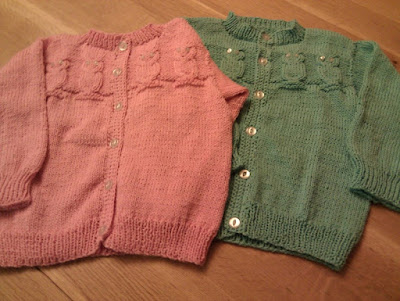 We did have our first midwife appointment today and I got assured that everything's just how it should be at 11 weeks. We even got to hear Sprout's heart beat on the doppler before he/she wiggled away.

Hello to anyone who checks this blog. It's been a while since I posted - first Christmas came and then that was shortly followed by morning sickness. I'm pregnant! I'm now at 11 weeks (due date is August 28) and so far I've been exhausted and nauseous for most of the time, leaving little inspiration for blogging. I think I may finally be turning the corner, so, here's hoping.
Below is a little photo tour of the last couple of months. :) 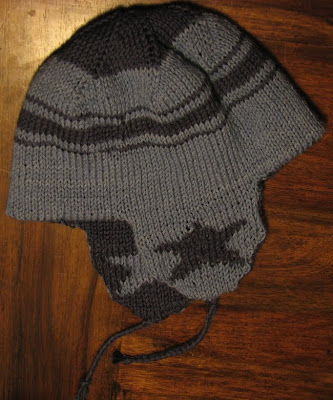 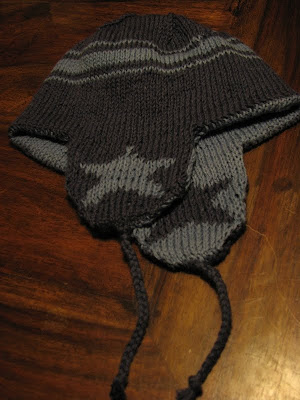 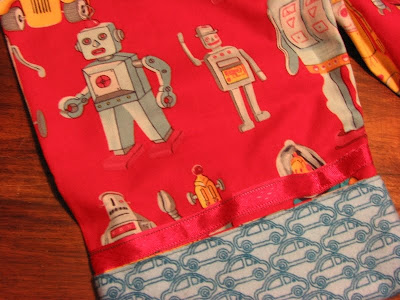 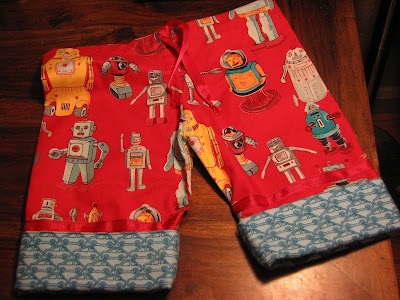 Pajama pants for the same nephew (I still need to get a pic of Q in the shirt I made him using the robot fabric as accents. I had to make him something with it, since the robot fabric was originally bought for him!) 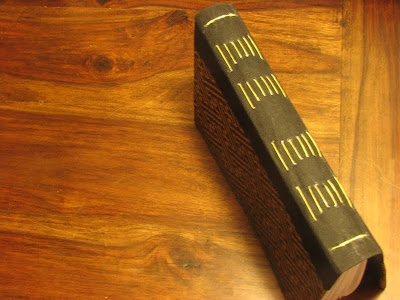 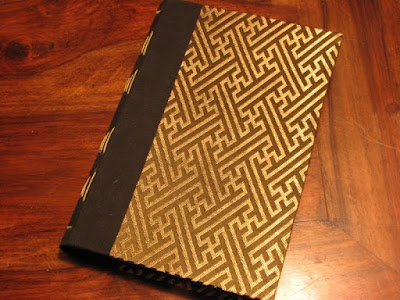 Handmade journal for my dad. This was the second book I've ever made. It's also the first one I made using fabric for the cover. (Note: Be careful to not stretch the fabric at all when you're gluing it to the davey board because it will shrink as it dries. I think it's only noticeable enough on this book to bother other bookbinders and me though.) 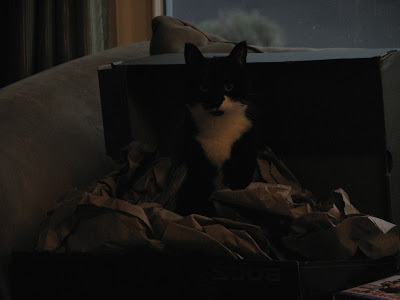 Binky in a box on Christmas Day 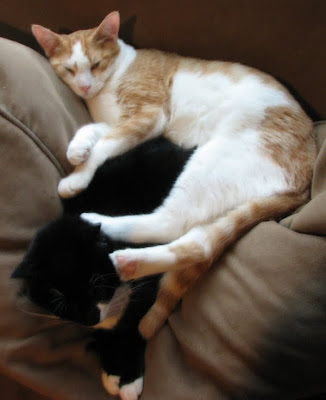 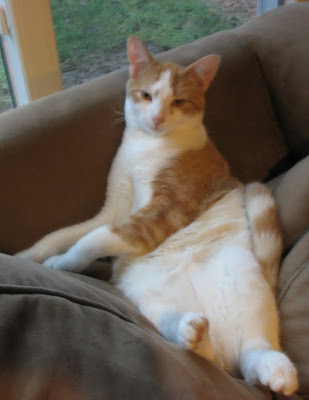 Marbles asserting his bossy, brazen kittenness. None of our cats are normal but he's the weirdest yet. 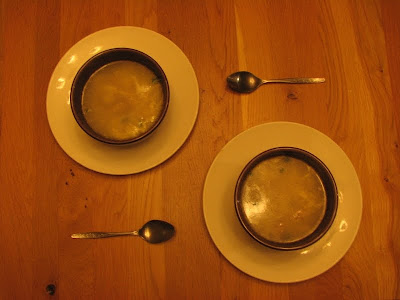 I made egg drop soup for the first time (before morning sickness hit) and it turned out really well.
Posted by Liz at 9:00 AM 1 comment:

Q hasn't gotten around to posting his Christmas project pictures on his blog so I'm doing it here. I'm too proud of his mad skills to not show them off. He used a lathe to turn the pen bodies (the innards come as a kit) and he has a jewelry studio in the project room for the other work. 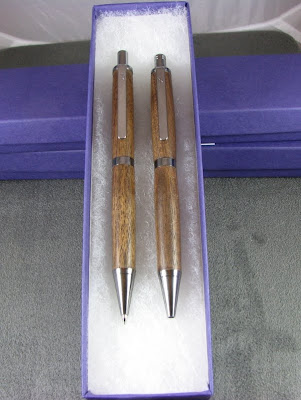 Pen and pencil set for his dad 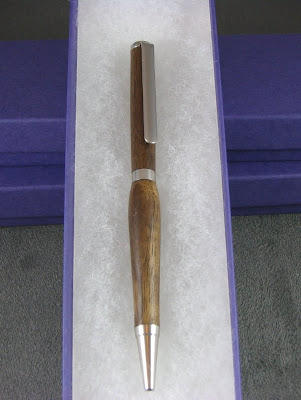 Pen for our brother-in-law 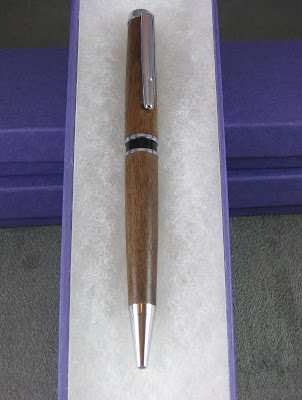 Pen for my dad 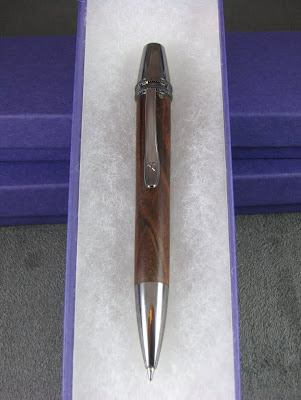 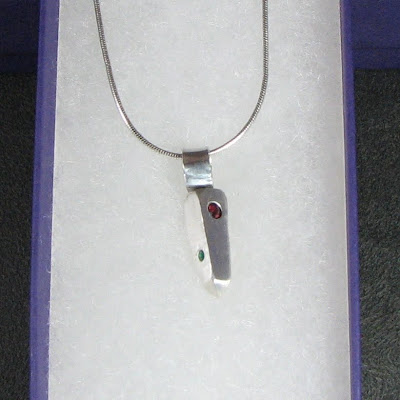 Mother's pendant for his sister. It's hard to photograph but it's shaped like a crystal point and has her birthstone, her husband's birthstone, and her son's birth stone set into three of the faces. It's riveted to the bail so it can spin and allow any face to be outward. There's still a free side, which suggests to us that our nephew needs a sibling. :) 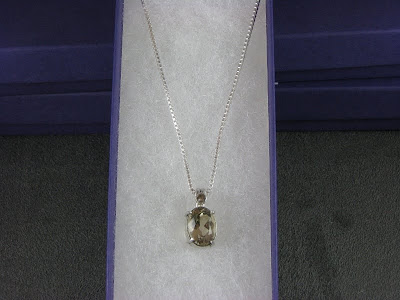 Pendant for his mother. I think the larger stone is a topaz and the smaller one is an Oregon sunstone.
Posted by Liz at 8:58 AM No comments: