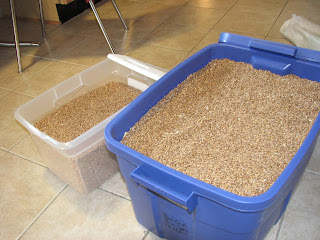 Now we know what 100 lbs. of wheat looks like. It should be enough to make bread for the next year...so far I've been too busy to try any though. 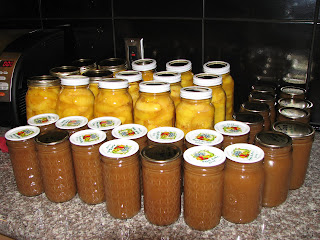 We went to Detering's on Saturday, lured by the advertised end-of-season peach special. Farms seem to be dangerous places for me. Q used up the last of the apple butter a couple of weeks ago, so I knew we needed apples too. Anyway, we walked away with 40 lbs. of peaches, 25 lbs. of apples, and 20 lbs. of pears. (The pears were just for eating because I'm entirely unable to resist them and they were being sold by the box.) Anyway, 21 pints of apple butter (equivalent, some are in 12 oz. jars) and 15 quarts of peaches later, our kitchen is again free of unprocessed produce (except for the drawer of pears in the fridge). The pantry is getting delightfully full.
Posted by Liz at 6:59 PM 1 comment: 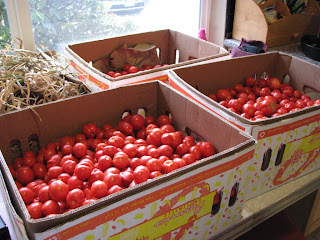 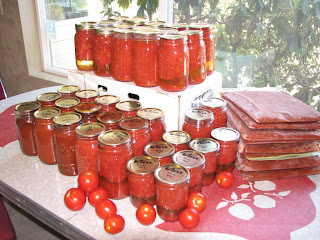 Here are before and after pictures. The raw tomatoes are the 100 pounds of organic we bought from Sunbow Farm. Great tomatoes, but I don't think I'll be able to justify the expense again. You can also just barely see the 20 pound box of onions we got there the same day. I was actually just getting them for storing, but was grateful when I realized exactly how many onions I would use in the marinara. That box disappeared fast and there are not a lot left now.
In order to can all the things Valerie and I needed, I went to Thistledown and got another 70 pounds of not organic, but they are local, which is actually more important to me. By the way, the whole tomatoes in the after picture are a few of those we've been harvesting from our garden, which I swear are some of the best tomatoes I've ever eaten - Early Girls. Definitely getting more of those next year. I want to figure out how to have a cold frame so I can get starts to thrive outdoors earlier next year. Maybe then they could fill some of my preserving needs as well as just being delightful for eating. Of course, I would then need to plant some Romas as well as my Early Girls.

So, what does 170 pounds of tomatoes become?

The marinara was my first experience learning to use the pressure canner, out of three batches of 7 quarts each, I ended up with a total of seven sealed. I froze the rest. Each time it seemed a little more successful, even if the numbers don't support that assessment. Try, try again, I suppose. It was nice when I was just using the boiling water canner because I got little jolts of success to bolster up my home-preserving ego between failures.