So, I bought the special rice and the nori ages ago, determined to try and roll my own sushi. Many months passed. Today, one of my students brought in some of her homemade sushi for lunch and I got the bug again. I mentioned how I was going to go home and actually attempt making sushi, finally. My class of Oregonian sixth graders immediately piped up in disbelief. I'd never made sushi before?! Many of them make it at least once a week (mostly vegetarian, occasionally a California roll).

I began to feel old.

When I was in sixth grade, in Denver, CO, sushi was still just a tiny bit odd among Americans who didn't have Japanese influences in their lives. It certainly was many years away from being purchased in grocery stores. Similarly, nori is one of my students favorite snacks. I only started considering seaweed something people ate about ten years ago (shortly after they were born).

So, how did it go? I wasn't foolish enough to waste money on sushi-grade fish for my first attempt; I settled for simple avocado and cucumber. The hot vinegar/sugar/salt mixture smelled strongly enough that I feared it could peel paint but when it was mixed into the still hot rice it made a remarkably delicious concoction. The rice was a little too watery but it became workable as it cooled so it wasn't a huge deal. (BTW - as a huge fan of sticky, gooey, chewy, starchy things; sushi rice in mass quantities has been mentally added to my favorites list.) Placing it on the seaweed and adding the cucumber and avocado was easy enough. The quantities my recipe suggested though were clearly insane. The first roll was quite difficult to roll because it was simply too full. The second was more successful and by the fourth I was marvelling at how, when the right amount of filling is inserted, they magically roll and seal, with the help of the bamboo mat, into a neat, solid cylinder. Woohoo!

Then I realized that I was expected to violate my neat little roll and cut it into sections so it could actually be consumed. Drama! So started the learning process...and a succession of final pieces that gradually shifted from flat ovals to almost perfect circles. Ta-da! It was remarkable - I had made something that definitely looked like sushi.

Miraculously, they tasted like it too. For the most part, the ugliest sushi ever created, but I had made it and was willing to eat it! I call that a success.
Maybe next time will be enough of a success that I'm willing to post pictures as well. :) As, since I've now proven that it will not be completely inedible, it looks like some sushi-grade tuna is also in my future. Yum.
Posted by Liz at 6:39 PM 2 comments: 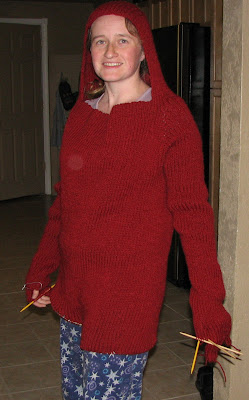 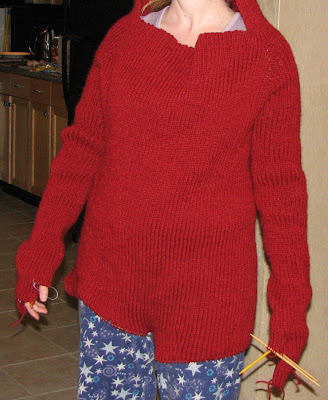 I kept meaning to post updates, but by the time I got around to it the suit had grown so much that they were out-of-date updates, so I finally just took up-to-the-minute shots and immediately posted them - knitting needles, stitch holders, pajama pants, and all. Amazing how little there really is left to do - finish 4 1/2 fingers, legs, socks, and finish tweaking the hood/neck.
Woohoo!
I was nervous about shaping the place where the legs split off, but my tinkering seems to have worked. I've totally got a bug to create a knit lounge pants pattern in the round now. In my spare time... :)
Posted by Liz at 10:37 PM No comments:

We found this little girl in a parking lot a couple of weeks ago. Running up to us, purring, she was quite irresistable and has remained a total lovebug since we took her in. She's chubby but had an eye infection that had gone untreated for long enough that her eyes were almost completely shut and covered in goo. After treatment with antibiotics, they're looking a lot better, but she may always squint. She's got lovely blue Siamese eyes though, just slightly cross-eyed. She's also got a respiratory infection that continues to linger but she's getting better. The vet gave her a clean bill of health and Digit/Isabel had their first "no bars" introduction to her today. (She's been living in the kitten cage, available to be seen and smelled but not free.) Digit is disgusted but unphased. Binky's doing a lot of hissing and growling. We'll try again tomorrow. 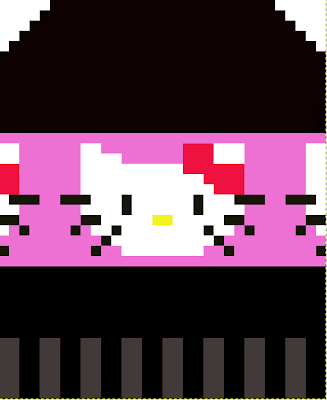 Here's the latest chart I designed, Hello Kitty! The slight color difference at the bottom is just how I designated that it's going to have the ribbed texture around the bottom. The Hello Kitty band is going to be about 2" tall and run all the way around the hat. I think that it might be fun to play with color combinations as well. A baby blue main hat color with baby blue (instead of red) bows?
Posted by Liz at 1:01 PM No comments: 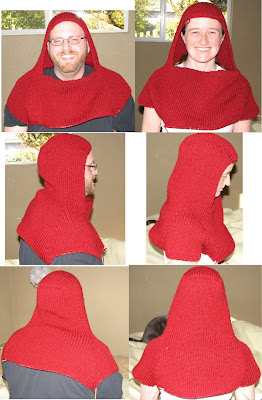 I've been commissioned to make a full knit bodysuit, complete with gloves, socks and hood. I got the yarn at the beginning of this week and have finally progressed to a stage where I can post the start and it actually looks like something.
Since it will have to be pulled on up over the hips and shoulders when it is complete and needs to fit a variety of sizes, from a women's size 6 to size 20, the neck hole needs to be rather large. I'm using the tall, broad-chested husband and little old me for the maximum and minimum sizes. I'm not quite happy about the neck yet, but I think I'll get more finished before I go about fussing with it anymore. It will be easier to get a feel for how it will actually drape when there is more below it.
Posted by Liz at 11:14 AM 2 comments: