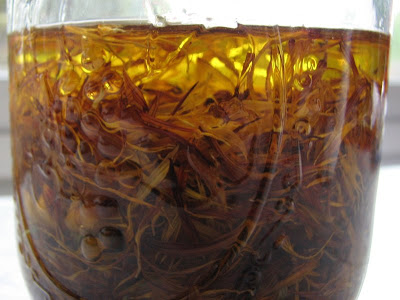 I have now joined the ranks of people who have jars full of oil and herbs in their pantry. I ended up with about a cup of dried calendula petals and poured oil over them up the the one cup mark on the pint jar. I'm supposed to leave them in the pantry for a month before straining the oil and making cream with it using some of our beeswax. 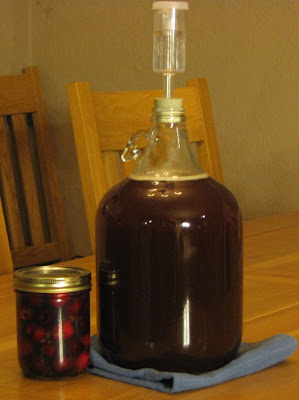 We also went cherry picking yesterday and got about 19 pounds. We juiced 8 lbs. and got 8 cups of juice. We topped it off with water and added lots of honey and a little sugar until the specific gravity got up to 1.090. We're going to make wine. Funny to think that we'll know if it's an experiment worth repeating just before cherry season next year. Wine making takes a lot more patience than cider.

The pint jar to the left is full of "cherry bounce". We took the recipe from our brewing book for the concept and then didn't really measure. Q pitted cherries and put as many into the pint jar as he could fit, drizzling in honey every so often. He then poured vodka in until everything was submerged. It's not as romantic sounding as using the traditional cognac or brandy but vodka's what we had. I'll be interested to see how that experiment works out, although I can't foresee any way it wouldn't turn out yummy. :)
Posted by Liz at 9:19 AM