Today was the neighborhood bike tour of gardens and yards with a focus on sustainability. It was nice and we saw some great stuff. A lot of our neighbors are doing interesting things. It was especially amusing to meet another one of those women who's me in 30 years. She was talking about fermenting pickles on her counter, juicing plums and making vinegar, and making her own cheese. It was satisfying. Many of our neighbors have fantastic chicken set-ups too, which makes me want to have chickens even more. Combining what I saw today with what I already knew about, I think we may be approaching a one chicken per capita density in our little neighborhood. :) We didn't end up taking pictures but the organizers were taking a lot, so I'll post a link to those pictures here when I get one. Garden tour meant that we did a bit of extra effort for sprucing up the yard. 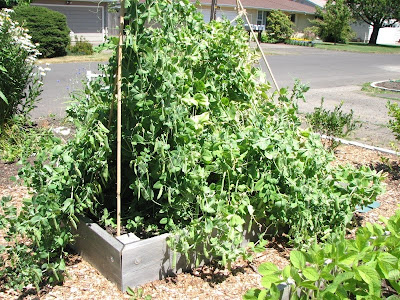 The poor pea trellis had collapsed under the weight of the vines. 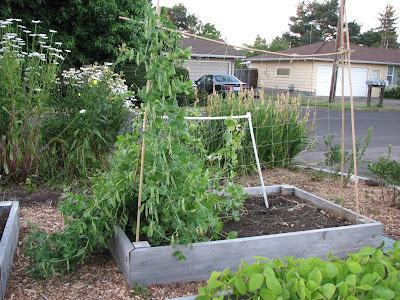 Most of the peas were ready or past ready so I removed most of the vines. I've got about 20 pods getting really dry in the sun for planting next year. I also got about 3 lbs. of shelled peas that went into the freezer. The last vines are a bit behind the others and I'll hopefully get a few more ounces of snacking peas before those vines come out in the next week or so for fall garden planting. Behind the shellers, I also left a couple of snow pea vines to finish ripening a few pods for seed. The garlic that had been growing between the rows since last fall was harvested at the same time. I got a beautiful head for replanting and 4 oz. of cloves that were pureed with some olive oil and frozen, ready for marinara making in August. 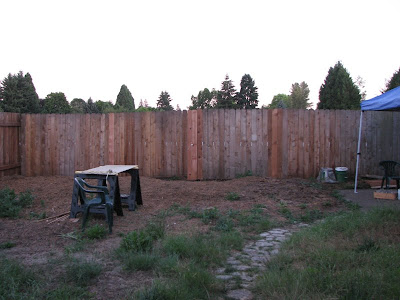 Q, bless his heart, finally got the last boards up to get rid of the gaps in the back fence. (Notice the more reddish boards.) He had an incredible trial resetting one of the posts that had been placed out of line to accommodate the trees since the stump remains were now just where the post belonged. After he finally got the new post set and the old panels up, there were gaps where boards had broken or they were strangely sized since moving the post changed the distance between them. 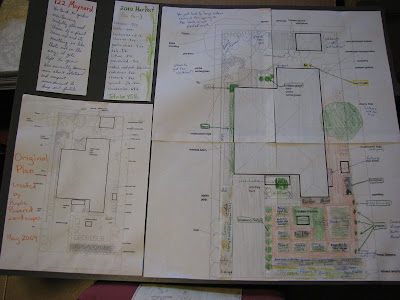 I posted the permaculture plan that was put together for us last year along with a colored version of what we're actually doing. I can't seem to follow a recipe no matter what form it is in. 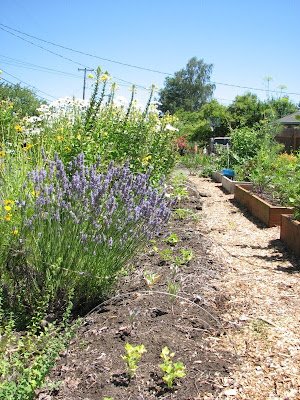 The front row of plants got a good weeding and all the dead lupine stalks got removed to give them more space. I fear we won't get a good crop on these this year because the wet, cold spring hung on so long but we'll see.

The war on grass also continued with a LOT of hand removal in the strawberry bed itself and liberal application of boiling water on the grass coming up in the paths. It's a pretty cool trick. Pour boiling water on any undesirable plant and it smells like cooking greens and kills the plant to the root. You just can't use it when the weeds are next to plants you want. I guess there's no way completely around just getting down on my knees with my weed remover and a bucket. The corn desperately needs to be sidedressed since it's far taller than my knee at this point. It's growing well despite my neglect though. 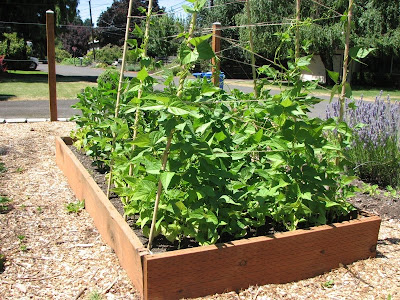 Beans look so happy when they really get established on a trellis. 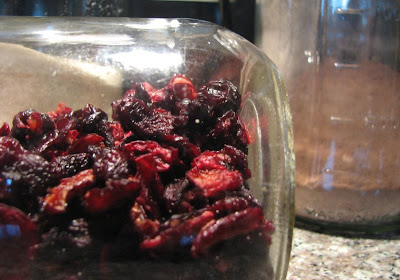 Cherry success - the dried cherries finished drying today so they're now in partially filled jars for conditioning. They still kept some of their color. I ended up with 15 1/2 oz. from the 5 1/2 lbs. I'm considering getting another 5 lbs. of sweet for drying when I go up to Detering's farm to pick sour pie cherries. Q's request is canned cherry pie filling.

That trip is probably also going to encompass some peach picking, since processing the desired 50 quarts of canned peaches is best done in increments. Q has an adorable habit of occasionally accidentally eating a whole quart of peaches when he wants a snack. As he puts it, he'll be eating and then notice that there are only a couple of halves left in the jar. At that point it seems silly to store them so he finishes them up. :) He's also willing to have them in his lunch every day. 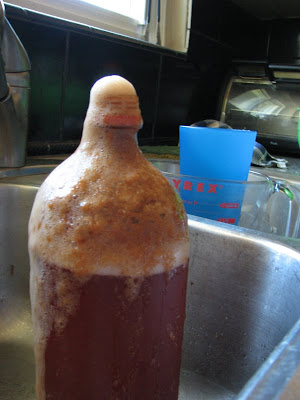 Cherry failure - The cherry soda experiment was... a little?... overcarbonated. :) I think that next time I'll just make cherry syrup and we can add soda water to make cherry soda. Thank heavens for the seltzer bottle. Q likes this stuff well enough to finish the bottle though. He says it's a little bit like a very young, sweet cider. 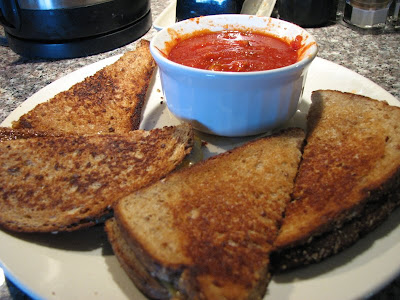 And I leave you with my latest obsession - grilled cheese dipped in marinara. It's the perfect meal for the night after we do pasta because we never use a full quart of marinara for the two of us. Speaking of, it's a good thing tomato season is almost here because I'm down to my last three jars!
Posted by Liz at 8:43 PM