I actually followed the pattern for this quilt. I copied the templates out of the book, rechecked them to make sure they were exact matches, carefully cut the fabric just like I was told to do, made sure each seam in the arcs of color was exactly 1/4". For me, this is a rare event but I know that quilting is an art of precision.
All of this is why I blindly trusted as I eased the color arc onto the inside and outside arcs yesterday.
The pattern gives a system for finding the middles and the middles of the halves and so on so the fabric can get evenly distributed and she suggests putting in pins only about an inch apart by the end. Clearly it's a tricky thing to do, so I wasn't to worried as I fidgeted it into place. When I got done I was left with this... 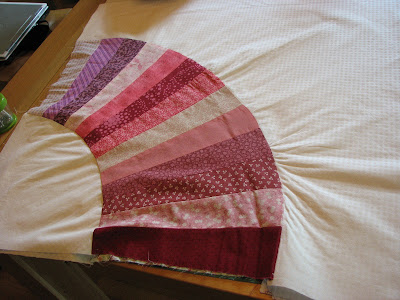 I tried it on two quadrants and then realized that I needed to take a breath and try a fresh approach today. For the fresh approach (after some seam ripping), I started by again comparing all four pieced color arcs. Just as I'd remembered, they'd all turned out the same size.
The next step was seeing where the pieces would overlap if everything was lying flat. Presto! The problem became extremely evident, since the white arcs didn't match what the color needs to do. When everything was laid out with the color on top, I used the disappearing pen to mark 1/4" under the color section. Then I pinned, making sure the color was always 1/4" toward the edge from my disappearing "stitching line". 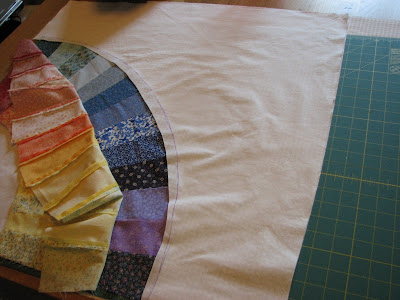 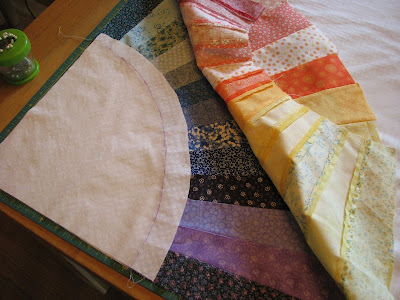 It worked, I got four pieces that lay flat but now the edges were all wonky, not square and not all lining up with each other. After making sure that all the color arc endings had their tops and bottoms lined up, I did a very scary thing. I cut the whole thing off to 27" square. It was terrifying; there are some things that there are no coming back from in sewing. 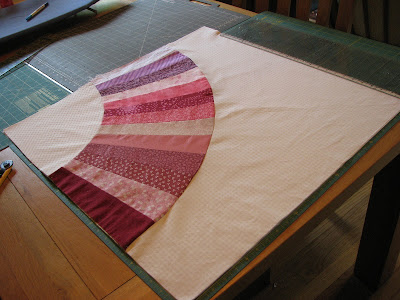 Thankfully, after I sewed the last seams to complete the largest 4-patch quilt block ever, the top lies flat and, I think looks great. It's a little bumpy in the picture below because it's hastily spread out on the squishy bed and it hasn't gotten a final press. 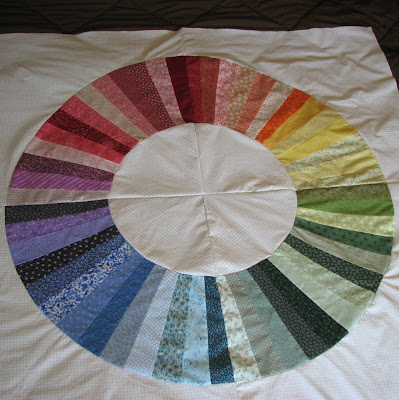 Now I just need to get the backing fabric, thread baste it all together and draw in the quilting lines. We're planning on having a quilting bee baby shower at the beginning of August where all my friends are going to help quilt it.
Posted by Liz at 2:28 PM