If you found your way here from Fight Back Friday, welcome! Anyone who hasn't been there before, consider heading on over and browsing the links, a lot of interesting stuff going on among the "Food Renegades". I'm definitely from the "slow food" category and hope the "paleos" don't mind all this grain!
To review, in case I've got new visitors today, we planted our first test patch of hulless oats back in late April. It's a bed to one side of our suburban driveway that's about 5' wide. The first bed was about 18' long and a second planting of about 8' went in at the beginning of June, making for a total of about 125 sq. ft. 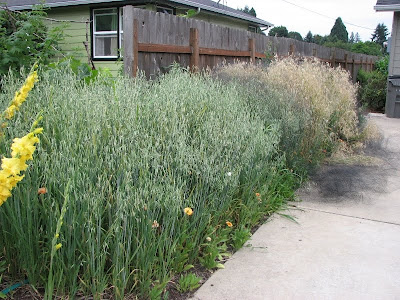 Yesterday I did a test run of starting the oat harvest because they are supposed to be gathered before they reach dead ripe and they're currently at hard dough stage. (By that point, when they're super hard and ready for storage, they are also not well attached to the rest of the plant anymore and there is apparently more crop loss.)
To begin, I followed the advice of some other small scale experiments and began clipping the heads off with kitchen shears but quickly realized that this was not as efficient as just pulling the heads off by sliding my hand up the stem. Knowing we're going to want to use the straw as chicken bedding this winter, I also used the kitchen shears to chop the straw off about 3-4" from the ground and lay it down to dry. 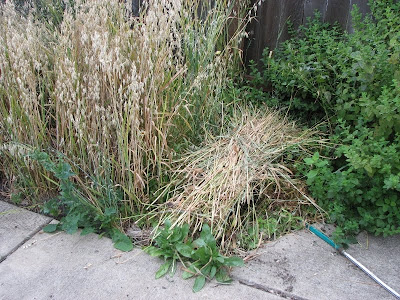 Since it's been overcast, I brought the grain inside and spread it out on drying trays on the kitchen table and covered it with thin dish towels to keep it clean. I still haven't decided what the larger scale curing solution is since I only did about 2' of the bed and used most of the kitchen table for that amount. I'm leaning toward the big drying rack and netting weighed down with rocks sitting in the driveway for a few days when I know it's going to be hot. 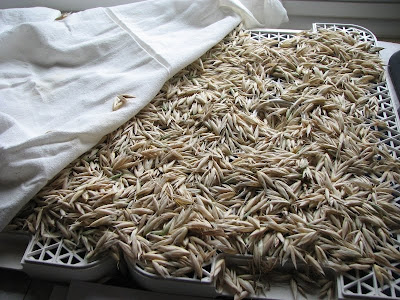 After about 2 weeks of drying or when it gets to storage dryness (hard kernels that can no longer be dented with a fingernail), we get to have the fun of threshing and winnowing it to get our final grain! Depending on how much we get, I'm seriously considering splurging on a cereal flaker since our flour mill doesn't have that feature. Rolled oats just work so much better for us since they take so much less time to cook.
I also have to leave you with a picture of the corn, which has literally grown a foot taller since I posted pictures of it last Friday! (If you think I'm exaggerating, notice that it is now taller than the 6' fence.) Neither the back sweet corn bed or the front popcorn bed has any ears started yet but I live in hope. After all, our summer here in Eugene started very very late this year. 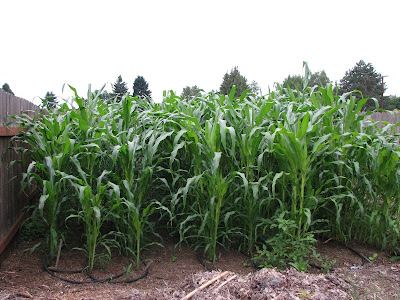