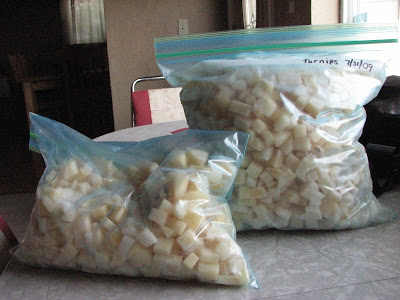 If you ever wondered what 6 1/2 pounds of diced turnip looks like, you now have your answer. I realized that those luxuriant turnip leaves are shading out my beloved parsnips, so I did a massive thinning yesterday. Some were huge and quite ready and a frost is not suggested for turnips like some other root veggies, so I figure we're in good shape. On top of these, I gave a few babies to a neighbor for a salad and boiled and mashed some for Q and I for lunch. Mmmmmmm.
One hears about the "turnip taste" but we thought they were just slightly sweet tasting mashers and will gladly eat them as such all winter - I'm already having visions of Thanksgiving dinner. All those blossoms for our sugar pumpkins are helping feed that fantasy as well. I love food.

Back to the turnips- I'm planning on using these in pasties for the freezer when the carrots and onions are ready. Seems like a great lunch idea. Like all traditional dishes, there are about a million and one recipes out there for Cornish pasties. I'm planning on taking the bits I like from all of them and making something like this for the filling...
1 lb. diced lean beef
4 c. diced turnip (replaced the potato with them since we didn't grow potatoes this year)
2 shredded carrots
2 c. diced onion
1/2 lb. diced mushrooms (yes, I know we don't grow these yet but they are so very yummy)
Saute all of that in butter, season with salt and pepper, and bake in pastry shells. Apparently, once they're cooled you can freeze them just like that.

In other news, I realized that I've got TWO very healthy, blossom-laden eggplants, not one, which means that I've been looking up ways to preserve eggplant. According to online wisdom it's best to make up the dish in advance and freeze it already cooked. Breaded, pan-fried sliced can be frozen for quick eggplant parmesan later. Ratatouille can also be made and frozen for quick meals later.

Forty pounds of Gravenstein apples make 3 gallons of sweet cider. They were a bit wormy so the juicing took quite a while today. We're going to make hard cider. We needed a blend, so we bought some red delicious from Washington today at the bulk food store to provide our "aromatic, low acid" counterpoint to what we already had. It takes 5 gallons to make a batch of hard cider. It looks like we have basically everything we need on hand from the blackberry wine making that didn't happen last summer, so final juicing happens this evening, followed by chemistry tomorrow. By my reckoning, we should still be able to use our second carboy for the first racking of a batch of blackberry wine and by the time we need the other carboy for the second wine racking the cider will be bottled and tucked away. I really hope it turns out. Hard cider and fruity wines are one of the little delights that I have that are so expensive that I always feel a bit guilty when I get them from the store.

Since the Gravensteins are free from a guy Q knows, we're going to hopefully go back and do a careful (fewer worm) picking to get some pie apples. We discovered today that they're really a delicious, tangy apple variety and should make good pie.

I've been collecting and laying down cardboard like mad to create the new strawberry bed as well. It's going to take up a large chunk of what was left of the front yard grass, about 150 sq. feet. I'm placing stepping stones throughout. I'm hoping to get all the dirt in in the next couple days before my parents come so 1) they can actually park in the driveway and 2) mom can help me transplant crowns, since they're done producing for the year. After those are moved, we can move the two old raised beds to their new homes and actually get our cinder block compost bins built. Busy busy busy.
Posted by Liz at 4:39 PM