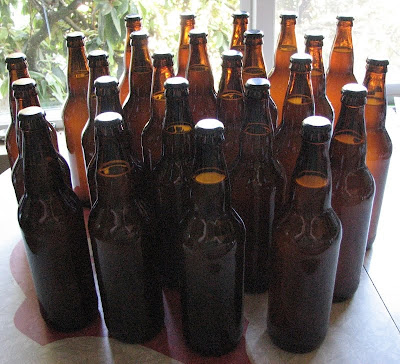 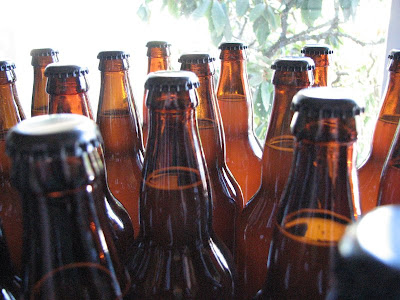 We bottled the cider yesterday and ended up with twenty-five 22 ounce bottles. Twenty four went into boxes to sit for a bit to hopefully get a tiny bit bubbly. The twenty-fifth went into our tummies. It was good. Q got us a bottle filler and a capper from the brew store on his way home on Friday and these tool are so cool. I really like using the capper. We're talking about picking the blackberries for our wine next week now that we have two empty carboys. After the cider, wine will feel like it takes forever, and we won't get to use the capper but... mmmmm, blackberry wine. 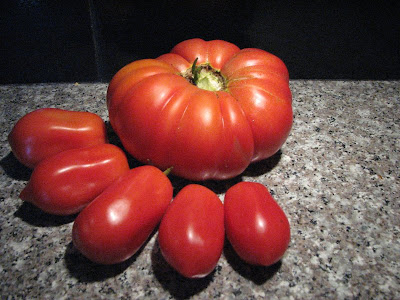 Our largest tomato harvest yet this year, including the monster beefmaster that was finally ready. It weighed in at 1 lb. 5 oz.! We had it as slices on hamburgers last night. A single slice exactly covered the bun.
Since we had five romas and we were at Thistledown Farm anyway (buying lots of corn on the cob for Q), I bought a box of tomatoes, some garlic, and onions, and have been reducing them down to marinara for the last couple of days. I think I'm going to try pressure canning again, although my results were so partially successful last year. 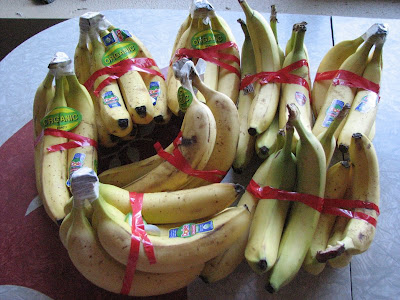 When we stopped at the grocery, the red tape banana man was just finishing. I don't know if others find this a mark of a red letter day but I was so excited I exclaimed with delight. Q resignedly said, "I'll go get a basket". We came home with over 16 lbs. of bananas, most of the them organic, and I've got about a 35 smoothies worth of bananas peeled and frozen now. Yay!
Posted by Liz at 5:31 PM