I've been putting quite a few hours in each day to create this, our new 12'x17' strawberry bed. We're hoping that when it gets into full production 204 square feet of strawberries will fill even my strawberry desires and we won't have to buy a couple flats each year to supplement our own. Q's just grateful that we've gotten rid of even more grass. He's getting quite a postage stamp sized space left for mowing. 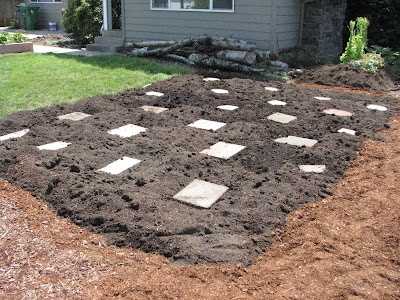 I'm going to plant every other row with the mother transplants and then I'll at least have a start for trying to keep a rotation going. Tricky though because I'm starting to think that about a 3 year rotation is perfect, since daughters seem to produce a little thin the first year but I'm told productivity starts decreasing at about 4-5 years. 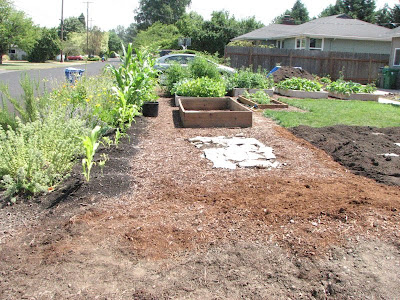 I managed to pull one of the old raised beds and put it in its new home. Q's going to do some repair work before we fill it with dirt. I'm going to transplant the rhubarb there this fall. It's perfect timing since they're supposed to be split about every 4 years and mine was 5 this spring.
That funny little outcropping of the grass portion, almost central in the yard, is where we're thinking we need to put in some "feature" - maybe some stone thing that has a bench section and an indentation as a sort of bird bath. In our Inspector Gadget moments, we think it would be really cool to incorporate the sprinkler in there too, since it's so centrally located.

I pulled 12 snails out of the front flower bed this morning. The lucky ones got put in the trash. The unlucky ones got thrown into the street - where snails who invade my garden usually end up. Heartless, I know. they seem to just adore the lupines and the irises though. 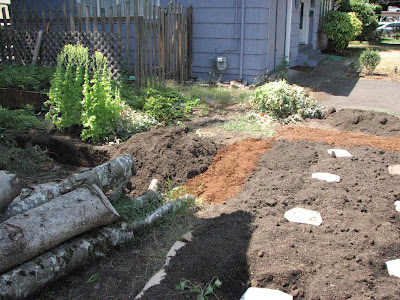 To the left is where the bed frame used to be. I saved the bolting lettuce and drying peas that I'm trying to collect seed from. Removing the grass roots that had grown up into that bed before putting down that bark was quite tedious. I still haven't removed the grass infestation from the corner where the two paths meet. I'll have to do it soon. It looks silly.
Between the deadheading, removing some bolted plants, and having all the leavings from apple cider making lately, I started an impromptu compost pile, visible just past the path. After the strawberries get transplanted, I'll be able to move it to where it will permanently be located. 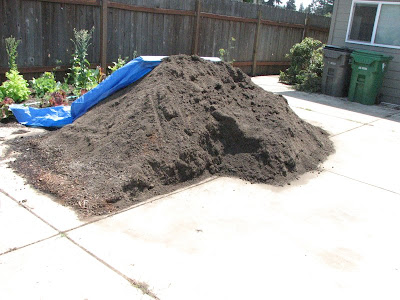 The incredible shrinking dirt pile, refilling the two beds will make quite a dent in it and the rest will likely get moved over onto the area where the grapes will eventually be. We'll be able to move it to where we want it from there as needed and will get our driveway back. 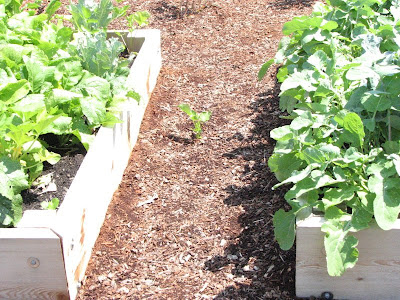 A volunteer parsnip came up in the path and I didn't have the heart to pull it. We'll see how he does. :)