Clarity and I celebrated her three week birthday by having a major snuggle-fest. Skin to skin snuggles is usually called "kangaroo care" and is extremely important for the health of NICU babies and an important step in establishing breastfeeding. A quick informative article is here. She's down to enough tubes that she's easy to transfer and manipulate into different holding positions. I'll be able to lift her easily by myself after the OG tube comes out of her mouth. 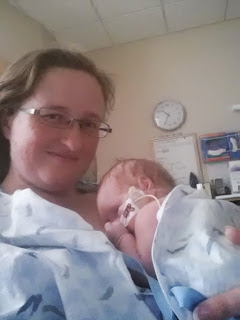 They turned off her versed yesterday afternoon and turning off the fentanyl sometime early this morning. She's now strictly using the oral atavan and methadone, which they will slowly and carefully wean her down from to avoid withdrawal. No more meds going in intravenously, just nutrition, which means she will get her last PICC line out whenever she gets to full NG feeds of milk (through her nose). I can't imagine how thrilled she'll be to have both hands up by her mouth.

Yesterday when she was in her crib, I tried teasing her lower lip with the pacifier and she opened up (one reflex for nursing still intact) and even sucked on it a little (two nursing reflexes intact). She had trouble getting the hang of sucking and keeping it in her mouth but she's also working around that silly OG tube.

At this rate, I'm hoping for no more OG tube and no more PICC line by early next week, maybe sooner. Then we'll really be able to focus on learning how to breastfeed.
Posted by Liz at 5:52 AM

I love all the Fantastic news!! She is really doing so well! I think the picture of "kangaroo care"is so beautiful! Keep rocking it, Clarity and momma!