Day 29 - The Horrible, Terrible, No Good, Very Bad Day (that turned out okay)

The day after they removed Clarity's orogastric tube, they reinserted it because she started throwing up. We've been having some frustration with continued output ever since, indicating that somehow her stomach isn't emptying properly/rapidly enough. However, the nasal feeding tube that goes to the beginning of her small intestine has been working well, so we knew Clarity's intestines are processing well. Thinking that the nasal tube through the stomach was kinked and causing problems, we took a trip down to radiology to have a new nasal tube placed on Tuesday. Output continued. On Wednesday, we again returned to radiology (a trip down three floors on the elevator that requires four people to take a 5+lb. baby and all her accouterments) to get an upper GI study done. This confirmed that she seems to have no physical reason (blockages, malrotation, etc.) for not allowing digestive juices to empty from the stomach. Frustration ensued because the other option is that she's not having good motility, a common problem with CDH. Dysmotility is much more difficult to treat.

All of this leads us to today. I was already worried due to the research I did on motility issues and really wanted to make rounds to see what was said. There was an accident on the highway route which made parking lots out of some of Denver's main arteries. I ended up getting to the hospital late and missing rounds - first frustration/stressor.

When I got to the hospital I found out that her OG output has increased substantially and clearly has a lot of milk in it, meaning that her feeds are now backing up into her stomach from the small intestine. This is a huge step backwards and was now calling into question how efficiently her whole GI tract is working, not just her stomach.

Around 10a she started being extremely irritable, crying inconsolably before finally falling into exhausted sleep and then waking up 15 minutes later, sobbing again. Finally, around 11:30a, I picked her up and cradled her to my chest at the magic moment and she immediately fell asleep. The nurse moved a chair over to me and I carefully sat down and got all the tubes arranged. Clarity, blessedly, finally took a 1 1/2 hour nap.

When she woke up, we started cares and found that even after several hours, her diaper was still totally dry. No urine output is another worrisome sign that something is amiss. She continued to cry and every time she almost calmed down it would start again. A baby with compromised pulmonary function and hooked up to monitors getting really mad is something that gets kind of scary because you can see her heart rate soar and her oxygen saturation can plummet. This also brings all sorts of alarms, adding to the cacophony of a crying baby, who can't be easily maneuvered for soothing because she's hooked to way too many wires and tubes.

At this point, the nurse had the doctor come in to look her over and I went over to the armchair and quietly had my nervous breakdown. It felt like all of a sudden my relatively stable baby was barreling downhill into some sort of crisis and nobody knew what was happening or how to help her. It took a lot of deep breathing to pull myself together with only a little crying so I could try to actively participate in her care. Being her advocate is all I can really do for her sometimes. Even though they had been replacing fluids intravenously, the doctor ordered some more since no urine output pointed toward dehydration. Since the feed back up had started shortly after replacing the NG, she also ordered an abdominal x-ray and the technician got there ASAP.

The picture came back with a brilliantly obvious answer. She was constipated by the barium solution they had given her for the GI study the day before and her entire lower bowels were glowing with radioactive poo. Taking away her feeds for the study had also led to slight dehydration, which compounded the issue. I was so relieved I became practically giddy. Yes, she was still crying in pain and hard to soothe but we had an answer and it was a "normal" baby problem. The doctor ordered a glycerin suppository and I went back to trying to help Clarity feel better while we waited for nature to take its course. She quickly became the anecdote of the day among the staff. Happy outcomes are always celebrated in the NICU.

As I was putting her back in the cot to change her dirty (yay!) diaper, we managed to pull out her NG - the one that we had had to go to radiology to replace only two days ago. At this point, almost at the end of a long day of misadventures, the nurse and I just had to laugh in resignation. Clarity had drooled so much that she had managed to soak off the tape holding her NG, OG and cannula in place. I held them steady until our nurse could retape them. The timing couldn't have been worse though because it was about 5 minutes before her (oral) methadone dose was due. The dose that we could only deliver through the NG tube that was just pulled. She been successfully weaning down so she only gets them every 12 hours now. Within the next 20 minutes, I was now trying to comfort a baby who was still extremely constipated and starting to suffer withdrawal. Thankfully, within about an hour they got approval to give her a dose through her IV. That was quickly followed by her atavan dose that was due. By 5p, we had a very loopy drugged baby girl who already had one dirty diaper. Oh, the relief.

I had to leave but our day nurse called when she got word back from Dr. Crombleholme (our surgeon and head of the maternal-fetal care center) about what he wanted to do. Clarity had her OG removed and he kept her NG out for the night. She's getting all of her meds and nutrition through her IV and we're going to see whether the tubes have been irritating her and causing the problems. Hopefully, she won't start throwing up stomach juices in a few hours and they'll just drain properly into her intestines without all the tubes interfering. I'm trying not to even dare to hope that we will finally solve the stomach drainage mystery with this experiment. No matter what, I'm just so grateful that she is stable and not in any sort of immediate danger.

The good news, in a day of so much regression, is that her sildinafil is now at full dose so they're planning on turning off her NO tomorrow and moving her oxygen to the wall on low flow. This is all proof that her respiratory system is totally kicking CDH booty. 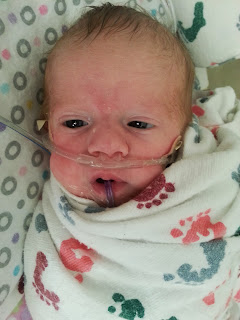 Here's a picture of Clarity at the end of the day, slightly cross-eyed from a combination of medication and sleeplessness. Here's hoping that the night nurse has a boring shift. :)
Posted by Liz at 9:50 PM

I discovered such a large quantity of fascinating stuff in your online journal particularly its discourse. From the huge amounts of remarks on your own articles, I figure I am not by any means alone having all the pleasure here! keep doing awesome…
high quality