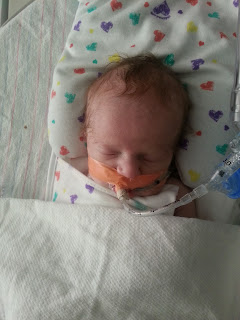 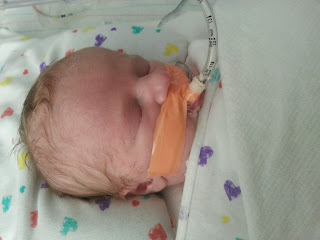 Last  night's scare seems to have been short lived.  Clarity was showing no more signs of infection today. If something was starting the prophylactic antibiotics seem to have nipped it in the bud.  We're waiting  for her cultures to come back to see if anything grew. All her stats were a bit better.  Her blood pressure has still been hanging out a bit high so they got her dopamine weaned to her baseline and they started weaning down her epinephrine.  I'm guessing that by this time we go in tomorrow that will be weaned to baseline.  I  don't know how those baselines were set and whether they'll keep decreasing the amounts if her bp  tolerates it;  they may be using their properties for something besides controlling bp.

They also weaned her back down on some O2 today.  She was at about 45%  and now she's down at around 40%.  This is not the first time we've tried this but the change happened midday and by the time we left her blood gases still looked good and saturation was very high. The one frustrating thing about her ventilation is that on the high frequency oscillating vent they don't want her breathing on her own, "fighting"  what it's doing for her.  She keeps putting in a bunch of breaths of her own,  which is counter productive and increases the likelihood of getting air in her bowel as she swallows it.  Feels kind of funny,   hoping that your child will stop breathing.

Fentanyl is the big thing we haven't been weaning.  In fact, she's been getting extra here and there when she gets wiggly and tries to cry.  These fits tend to make her heart rate go way too high and more fentanyl brings her back pretty quickly.  She's clearly having some sort of discomfort/distress at those times but we can't figure out what.  I'm suspecting that until she can get weaned down on the fentanyl to about half of what she's on they won't want to do surgery because their additional pain relief options will be limited.  I'm not in any hurry.  If she can get rock steady before surgery she'll be that much more likely to pull through without trouble.

She looked so good tonight that it wasn't even stressful to leave her in the care of the nurses while we came home to sleep and spend time with sweet  Willow.  After we left, Q's  parents went by for a visit so it was nice getting a mid-evening report that she was doing well.

In the sad news of the day, a CDH boy whose story I've been following online  and who
was born about 24  hours before Clarity,  at almost the exact same gestation, passed away today.  He was having some sort of electrical heart problems they hadn't expected that were causing arrhythmias and those challenges plus the CDH  were too much for him. It was a pretty shocking blow for me and sent my anxiety over baby girl through the ceiling.  They're just so fragile. Thankfully the other little one, a girl, who was born a couple days after Clarity is doing well.  My thoughts just keep going back to that little boy's family, hoping they're finding some comfort in their grief to get them through tonight.

Tomorrow's another day of sitting and watching out beautiful girl,  trying to send her strength and love.  We're over a  week in without any major surprises.  Let's just keep our fingers crossed that it will stay that way.
Posted by Liz at 3:54 AM

This is Kara Allison-Housh, Jared Housh's wife. We are following your posts about your precious baby and send warm, healing energy to her. Love and peace to all of you.

Thanks Kara! Hopefully we'll see you in New Mexico at the reunion next summer and be able to introduce you to both of our girls.

I'm looking forward to it! It'll be great to introduce cousins and NICU warriors Harrison and Clarity to each other and to meet Willow. Harry spent 8 days in the NICU right after his birth due to what we now know was an infection. The NICU is a hard road to be on, but miracles happen every day within its walls. Love and peace.