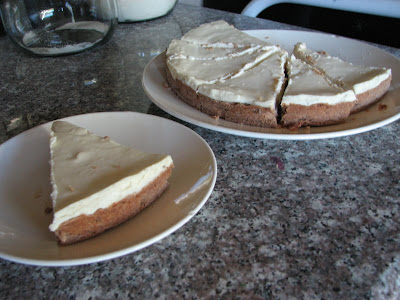 We decided to create a snickerdoodle inspired pie because those are two really good things. :) According to the America's Test Kitchen Family Baking Book, snickerdoodles are marked by being a little sour along with the sweet cinnamon. Cheesecake replaced the "pie" idea since it would provide the tartness. We decided that we needed something cakier than a traditional pie crust or the graham cracker crust of a cheesecake. The classic tart crust recipe, whose texture was labeled as "more similar in texture to a cookie" seemed like a good choice after adding some cinnamon. We baked the tart shell and then filled it with the "icebox cheesecake" recipe. This prevented us from having to bake the cheesecake like a traditional one; it just had to be refrigerated for at least six hours.

It was a success. Next time we will lightly sprinkle it with cinnamon (for taste) and large grain sugar (for prettiness). I think I'll cook the crust a little bit less next time too. It was good but maybe would have been a bit chewy if it was less cooked. The recipe's definitely a keeper.

Crust
Mix in a small bowl...
1 large egg yolk
1 T cream
1/2 t vanilla
In food processor, combine...
1 1/4 c flour
2/3 c confectioner's sugar
1/4 t salt
1 T cinnamon
Add...
8 T butter, cut into pieces and chilled
It will require about 15 pulses to create a mixture that looks like coarse cornmeal.
Add the liquids and process until the dough just comes together.
Form into a 6" disk and wrap tightly in plastic wrap. Refrigerate for at least an hour.
When you take it out, let the dough warm on the counter for about 10 minutes before forming it into the tart pan. Bake at 375 degrees for 30 minutes. (It said to line the inside with foil and use pie weights but I didn't and there were only a couple of bubbles.) Let it cool completely.

Filling (measurements are different than the original, most are half, except the flavorings)
Whisk together...
1/4 c cream
1/2 pkg of unflavored gelatin
and microwave until the cream is bubbling and gelatin is dissolved, 30-60 s.
In the mixer bowl, cream together...
1/2 c cream
1/3 c sugar
When soft peaks form, add...
8 oz softened cream cheese (we use neufchatel)
2 T lemon juice
1 t vanilla
and the gelatin mixture.
Beat until the filling is smooth and airy, up to 5 or 6 minutes then pour into the cooled crust.
Refrigerate until set; at least 6 hours.
Posted by Liz at 4:21 PM