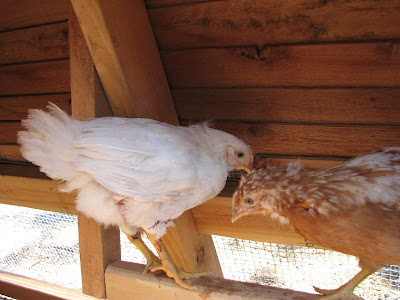 I was out taking the picture above and others of the yard this afternoon when I noticed that there was blood on Vivian's leg. (You can see it a little in the picture - she's the buff one.) Upon closer examination, we determined that the cat that had been stalking around had gotten a lucky shot under a crack at one end of the tractor and she'd been pretty badly injured. She'd lost a lot of her upper leg muscle and, even if she miraculously recovered, would never use that leg again. We made the difficult decision to put her down.

Later in the afternoon, Q made a makeshift killing cone from an old jug of windshield wiper fluid and performed his first duty as the family butcher. I'm so grateful that he feels like he can do that. She was such a tiny body but we felt like it was only proper to make the killing not be completely senseless by getting some practice and a little food from it. We hadn't practiced our butchering skills since we first learned them last Thanksgiving when we helped our poultry farmer kill and dress the dozen or so turkeys she'd raised for the holiday.

After she was killed and had been bled, Q scalded the body and pulled out most of the feathers. I don't think the water was still quite hot enough or it wasn't left in there quite long enough because a lot of them didn't come out very well. We cooled the body in an ice bath and brought it inside where I removed the feet and skin and eviscerated it. I discarded the portion of the leg that had been badly injured and didn't save the wings because they were basically nothing but skin and feathers. After the turkeys, such a small body was difficult to maneuver and get everything easily but thankfully everything is the same on both species so it was only scale that changed. 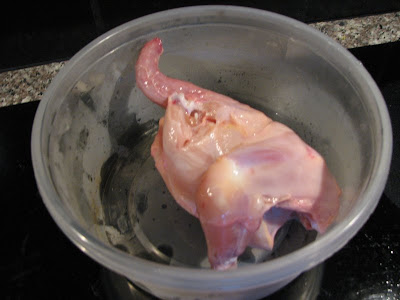 Here's what was left, ready to cook. It's sitting in a 6 cup storage container so it's clear how small it really was. Scary to think that if we'd been raising Cornish cross meat birds this chicken would have been a respectable 3 or 4 pounds by six weeks of age instead of a tiny little thing. I popped it in some boiling water just long enough to cook the meat. I stripped about a cup of meat from the carcass and then froze the bones for the next time I get enough to make stock. Unfortunately, I'd just made stock a few days ago and had canned it this morning (blog post to follow soon) so this rather small package (the bones easily fit in a sandwich bag) will have to be stored for quite a while.

In one of those strange twists of fate, right as we had been coming to the conclusion that Vivian needed to be spared any more pain, a guy pulled up and started talking to us about our tractor, wanting to know if we'd built it, etc. We got to talking and we asked him if he knew anybody who sold layers so we could get a second bird so Lily wouldn't be all alone. He immediately called up a friend who lives about 1/2 mile south of us and she had an extra layer who she was willing to part with. She didn't even ask for payment so we took her a jar of apple butter and a plant of basil as thank you gifts and came back with a new chicken. I don't know if we'll ever see Tom (guy who stopped) or Shelby (woman with the chicken) again but we're grateful to both of them.

We completely moved the tractor to a new location where we'd removed all the bark mulch so it was sitting on very hard, level ground and have now placed boards at either end that are weighted down with rocks to completely eradicate even a small crack. Q thinks that perhaps the cat got his lucky shot because the chickens couldn't see that he was there through the solid end of the tractor.

The new chicken, who as alternately been called Little Miss Bold as Brass, Little Miss Bossy, Chickenzilla and "the monster" today, earned her sobriquets by immediately picking shamelessly on little Lily when we put them together. We let a little of it happen at first thinking they needed to establish pecking order but she was just being a bully and had Lily cowering and pushing her head as far as it would go into the corner to try to escape.

They were separated, Lily being put in a crate, while we went down to the chicken store and got some wire mesh and an additional feeder and waterer. Q worked some magic on the tractor and separated it into two spaces for a while until they get more used to each other and Little Miss quits being so aggressive. A very small silver lining is that the new chicken is a couple months older than Lily and is right at the age to start laying. We may be getting eggs sooner than we thought.

Well, we've gotten over one dark little milestone on our path toward greater self-sufficiency. 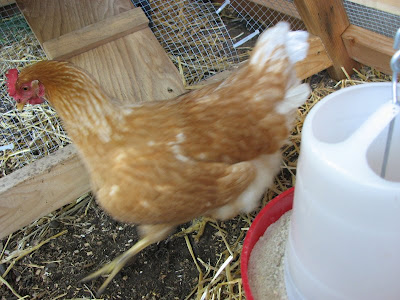 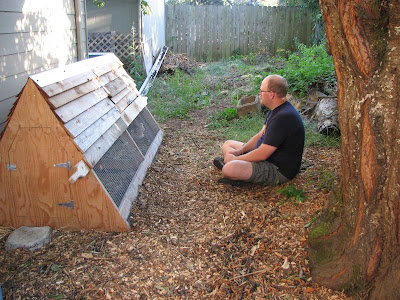