So, I'm guessing that I'm not alone as a gardener in finding mid-August a little frustrating. Spring crops have come and gone. Fall/winter crops were planted in late July. The bulk of the harvest isn't ready until the end of August/beginning of September. We've harvested about 4 small eating tomatoes and the plants are heavy with green tomatoes, which are just now getting their first blushes of color. The winter dried bean crops are just slowly ripening and drying out. Squash are still little green tennis balls of potential.

This means I've been having to prepare for winter in other ways. The first being finally getting the sweater I've been trying to make Q for a couple of years done. The yarn was originally bought for a different pattern (and was the second yarn choice/knitting of that pattern). The cardigan that was originally intended had a couple of very thick cables that used way more yarn than I could have imagined and after I was done with the body, I began growing fearful that I'd have to get more of a different dye lot and work it in with what I had left of the original on the sleeves. To top it off, I wasn't happy with how it was turning out so it got quietly put aside in frustration.

Then the knitting gods smiled down at me and sent this book... 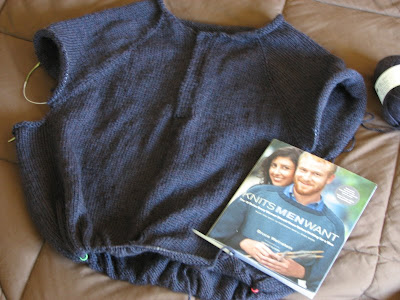 Not only are the patterns fantastic but each one is written in six sizes and four gauges. Yes, that's right. It's a miracle. I've never seen a pattern I wouldn't have to size up for my 53" broad-chested husband. In this book I'm not even using the largest size (which is 60"). It's like heaven and the pattern is so eloquently simple that I, the queen of modifying patterns, am following it to a tee.

Since it's top-down, we tried it on Q after I separated off the sleeves and finished the raglan increases. It fit him perfectly from what we could tell. I've got another 6" of body to knit and then we'll try it on again for length before I do the sleeves. Finally, Q will have a me-knit sweater to wear this winter.

and partially reading to pretend that I'm a farmer. 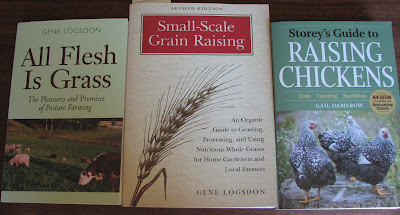 If, in your schooling, Johnny Tremain and Across Five Aprils never made it onto your reading list, they are must reads. They're wonderfully written and will be required of my students this year. Mayflower is also an amazing story about the first Puritan settlers and made me see them in a whole new light. I just started Undaunted Courage (about Lewis and Clark) and so far it's good. We'll see.

As for the farm books, Gene Logsdon is a new folk hero around here. He's witty and wry, very practical, a total rebel, and has been doing the kind of things we want to do for several decades. His blog is a good time as well, if whole books are more than what you're willing to take on regarding these subjects.

Here's Digit before he noticed me paying any attention to him... 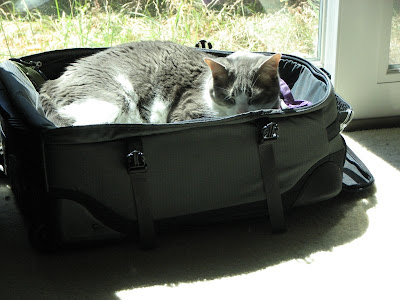 and after. He's such a show-off. 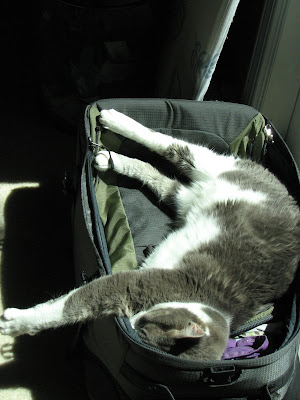 We're leaving to visit Colorado in a couple of days and the cats are enjoying my early packing attempts. I don't think he realizes how uncomfortable the overhead bin would be for several hours, even for someone as limber as he is.
Posted by Liz at 1:15 PM