We realized last night that we could capture the wild swarm that was settled on the tree across the street. Duh! How else did people get bees for centuries? Sure enough there was lots of information on the web about catching a wild swarm. I called my friend , Mary, who I knew keeps bees. She was very excited and got the extra gear she had all ready! Of course, we're capturing bees on a Sunday, the only day of the week that Glorybee, our local beekeeping supplier is closed.

I called her this morning after I got the go-ahead from my fascinated neighbor. I was so worried she would tell us no. Silly me, apparently offering to remove a swarm of bees from someone's property is seen as a favor by most people. :) 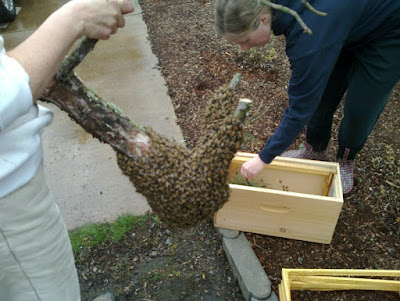 After Q got the branch sawed through, he passed it down to Mary, who carried it across the street to the waiting super. She'd put a bit of honey in the bottom to get them started. She put the branch in and some crawled off but not a bunch. We'd read that you just give it a firm shake to dislodge them. This really got the bees all riled up but bit by bit it did the trick. 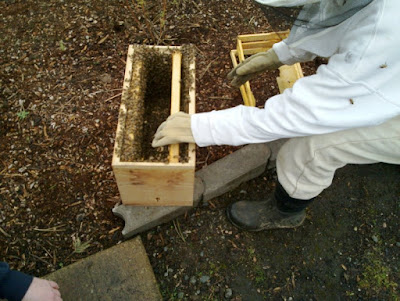 After they'd calmed down a bit we started putting the frames we'd taken out back in. Nice and slow, letting them move out of the way as we eased them in. Mary put this one in and then she let me do the last three. It was way cool.

Q got stung once and Mary got stung twice and I didn't get stung at all. Q said his hurt for just a moment and then didn't hurt at all after that - even though he got stung on the top of his ear! I was lucky. It's fun when they're walking all over you though. 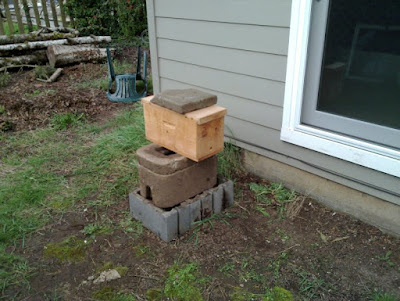 We eased the top back on, let them settle and find their way in and then moved them to the back yard, just outside our bedroom door so we can watch them go in and out. This is a little starter box called a "nuc" and we'll get a full sized one this week to transfer them into. This one holds five frames, the full one will hold ten. It's lucky that we'd just replaced the water meter valve box about a month ago so we had a nice sturdy thing to set them up on (along with three cinder blocks we stole from the top of the compost bins).

Considering how long we've been talking about getting bees, this was quite providential. Talk about the universe needing to give us a big broad hint that it was time to finally start our journey into apiculture. More to come soon...
Posted by Liz at 1:26 PM

oh my goodness, you're so brave! and so lucky!
grats on the newest members on farm Hartman :)
-Marina