We've been the adventurous cooking types lately. The first experiment was trying to find new ways to use beans and rice for delicious nutritious lunches. (Nobody can actually have a bean, rice and cheese burrito every day and not get a little bored.) Q wanted to try something Cajun. I was skeptical. As usual, he was right in the end. It turned out really good. We used this recipe but left out all of the meat and the pickled onions. 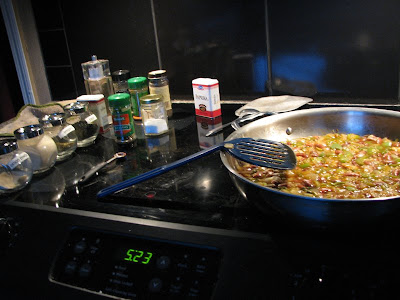 I didn't want to make up a batch of the "Creole seasoning blend" until I found out if we liked the recipe so I just got out all the spices and used 1/2t for every T mentioned in the original recipe. Quite the way to make me feel like a real cook, madly tossing bits of this and that and more and more into the pan. 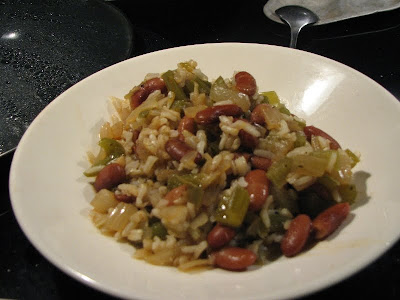 The final product was super good. This is coming from someone who doesn't really like green peppers either. It wasn't even too hot. I can see why it's a staple. It's really good and the simple ingredients make it dirt cheap.


Bagels were the other experiment. As my first batch, I'm posting them because they're so pathetically unattractive that I'll get to gloat to myself over future improvements. They can't look worse. They were really good though. They ended up a bit dense but that may have had to do with funny dough handling. Time constraints ended up having the dough made on Friday night and then formed, boiled and baked on Saturday morning. Boiling dough products also takes a bit of getting used to so I'm hoping I can learn from my experiences. 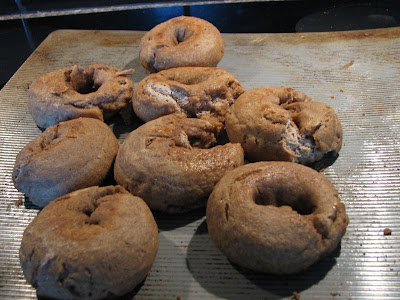 They were pretty great that day for lunch with homemade pesto and yo-cheese and some deli turkey. If I can get the hang of it bagels might make rather frequent appearances around here.

This week we're in the middle of the chicken challenge posed here and I'm looking forward to posting our results. Unfortunately, I've now forgotten to take pictures for all three nights, so it won't be a very visually interesting post!

Tomorrow's Friday (yay!) and then on Saturday we're taking this class through OSU Extension. It should be a lot of fun. I've never been interested in things that were "trendy" before. It's kind of fun to easily be able to find seminars and classes in things that interest you.
Posted by Liz at 9:47 PM