We kept not getting the latest cinnamon bread eaten so I made bread pudding for breakfast on Sunday. I'd never done it before. It was delicious. The recipe is basically this one. 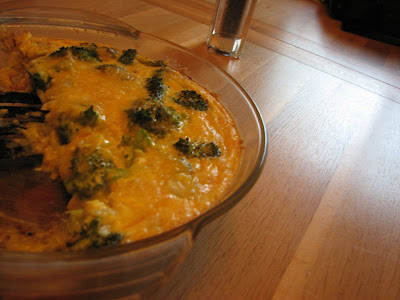 We had some broccoli hanging out in the fridge and a lot of eggs so quiche was the obvious choice the other night. I found this recipe and made only a couple of minor adjustments based on what we had...okay, not so minor; minor for me? Bacon was about 1/4 lb. of ends that I had left from a batch we bought from a local farmer, Swiss cheese got replaced by cheddar, butter got left out, I used a can of evaporated milk instead of fresh, and added broccoli. Eggs, flour, salt and onion were unchanged. Not having the crust on it really cut down on the prep time and we didn't miss it. The egg/flour was enough to make it almost bready so it held form well but it was also very moist and gooey at the same time.

Q decided that both of these recipes need to make it into the rotation.
Posted by Liz at 6:34 PM