I've been trying to perfect cinnamon bread, the standard being what I remember of my grandmother's. I've got her recipe. I've got her cinnamon and sugar shaker. I had lessons from her as an adult before she died. It seems like it should be easier than this. :) 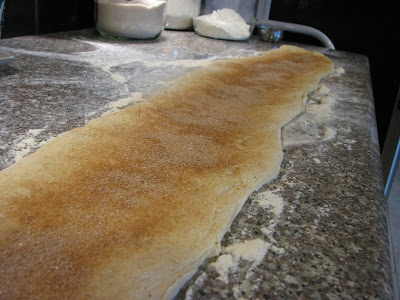 Most importantly - roll out the dough really, really long. Second most importantly - listen to her voice in your head constantly saying, "well, maybe a little more than that" and "don't forget the edges". I've started shaking it on thickly then spritzing it down with a mister of water, then sprinkling again. 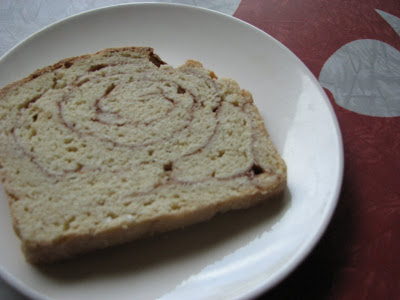 Using the above method, I finally got visible rings in this last batch. It was sort of an unattractive loaf but it was also gluten-free so the dough was a major pain to work with. It was still yummy though.


I've been making the dough in the bread machine - liquids in first, sugar and salt second, flour on top, yeast poured into a hollow made in the flour mountain. I then prepare the loaf, let it have a final rise and bake it at 425 degrees for about 45 minutes.
Posted by Liz at 10:15 AM