A few weeks ago Q ran 6' heights of chicken wire between two corners of the shed and two corners of the ell that is the master bedroom. He cunningly incorporated the tractor door and the chickens now have their own run during the day. It makes them exceptionally happy. The serendipitous part of the situation is that the bedroom's sliding door is enclosed in the run, which has provided a lot of opportunity for amusement. 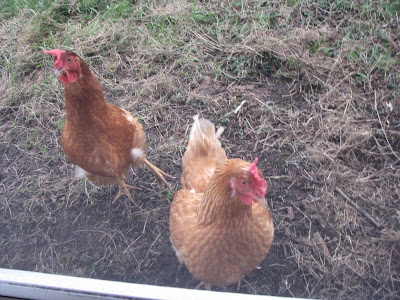 The chickens are alway anxious to watch chicken TV and look through at the strange life inside a house. They hurry to the door every time anybody approaches it. Little Miss (on the right) also thinks she should live in the house and has started trying to hop up when the door is opened. She is also the one who hunkers down and spreads her wings a little when you scratch her back and tends to also follow Q like a dog when he's out in their yard. Lily (back and on the left) is much shyer and more difficult to handle but they've each given us an egg a day throughout the winter. They apparently don't know that chickens are supposed to molt and quit laying when there is less than 15 hours of daylight. ;) Silly chickens. 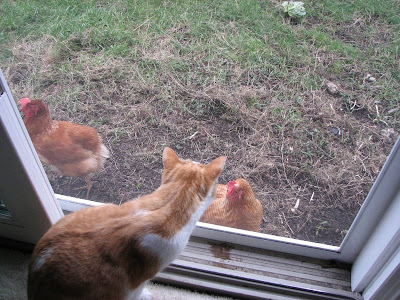 This is also a fine cat tv station and for some reason it especially tickles me when all of my orange animals get to observing each other.
More proof that spring has sprung came today in the form of CHICKS! We've been talking about raising a few meat birds this season and we, of course, had to visit the chick room when we went to the Urban Farmer today to get some other supplies. We decided that there's no time like the present (and I swear Q's a big softie when it comes to the joy of possessing chickens) and we picked up 3 chicks who are probably a little over a week old. They happened to be a little older than all the other chicks he had and were the only ones in their tub so we got them all. They are now living a life a luxury in our guest bathroom tub under a heat lamp. 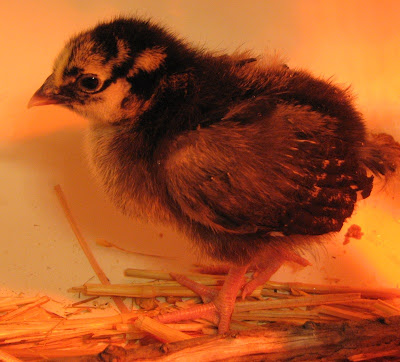 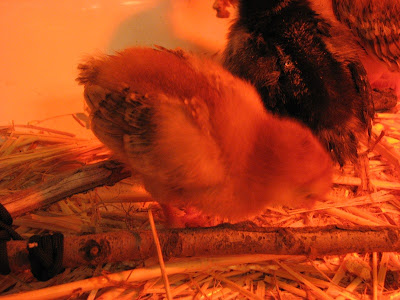 Two Rhode Island Reds
They're both dual purpose heritage breeds that are known for being good layers as well as being meaty and I'm glad that it just happened to work out that we now get to experiment with some new breeds. Silver Laced Wyandottes are so strikingly beautiful when they grow up that if this one ends up having a nice personality I'm thinking it might be nice to replace Lily (who would become stew) and have an easier to handle layer. We're planning on training them all to be accustomed to people and easy to handle anyway since it will make their short lives less stressful for everyone involved. They should be ready to harvest in mid-July. I'm very interested in the cost comparison of raising and processing our own birds versus the poultry CSA we were part of last year. 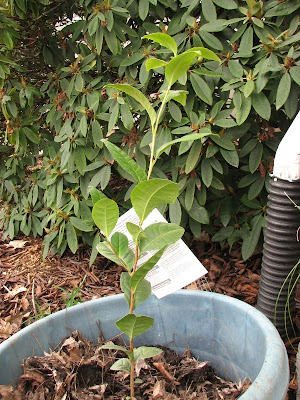 When we went to the Good Earth Home Show in February we picked up this guy at the One Green World booth - a tea plant. I potted him in a pot that's far too big for him now but he's going to be permanently potted (so we have the option of bringing him in if it gets too chilly) and I know how lazy I am when it comes to repotting.
We also got 5 little pots of saffron crocus bulbs (ever wonder where saffron comes from?) and a grape to replace the one that died last year. One Green World is an extremely dangerous plant nursery. They're in WA, so they know how things grow in the Pacific Northwest and they tend to carry rather unique plants that pique my interest and make me think crazy things like, "wouldn't it be fun to grow my own tea?" As I said, dangerous. 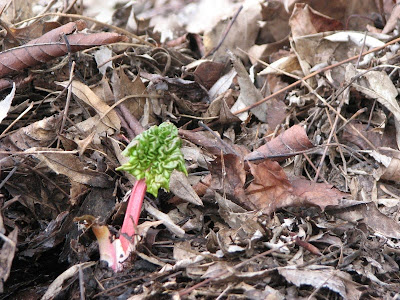 I've got the beginnings of growth from all four of the rhubarb plants and they didn't care a whit about last week's snow and freezing temperatures. The asparagus crowns have not awakened yet. 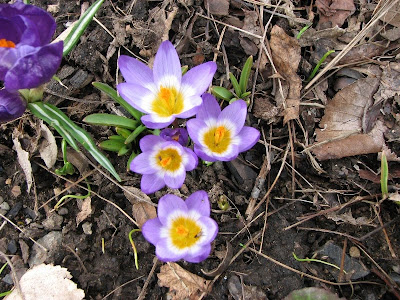 The front bed is absolutely littered with crocuses. A few hyacinths are starting to put forth stalks as well and there are tulip leaves a couple inches high. During last fall's bulb planting window, we got amazingly motivated and tore up the front perennial bed that had gotten almost completely taken over by lupines and daisies. We widened the vegetable bed that abuts it toward the house and used the landscaping timbers that had been at the street to clearly delineate the two beds. This summer we're going to bring the short stone retaining wall that lines the west side of the yard all the way across the front to replace the timbers. In the process, we dug up the bulbs that we've had planted when we moved in, which had been multiplying for the last 6 years. There were zillions. We also (of course) bought more to help provide some more zesty variety. All of the work has paid off and I think we're going to have a long bulb bloom season in that bed as different varieties reach maturity.
Posted by Liz at 7:01 PM