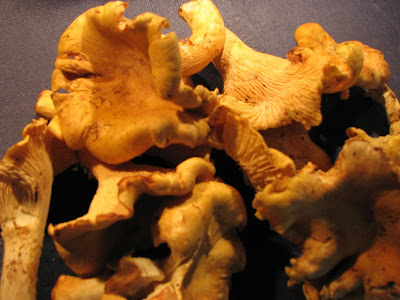 We joined a Mushroom CSA this year! The forager happens to be a parent at the school so we get delivery straight to my box at school each week for 10 weeks. Yay! I love mushrooms.

It's created a delightful challenge though - using 1 - 2 pounds of fantastic mushrooms each week. For the first three weeks we have gotten golden chanterelles (like the ones pictured above). Can you believe the size of them?

Week 2 - zucchini pancakes with mushroom gravy (remarkably like a hippie version of egg foo yung) (Note: I didn't actually follow the gravy recipe. The most important difference being that I didn't put in summer savory and used Better Than Bouillion rather than defrosting stock)

Week 3 - Surprise Biscuits (my name) or Biscuit Pasties (Q's name)
This recipe was my own brain storm tonight and used only about 1/2 lb. of this week's 2 pounds so we'll probably have sauteed mushrooms mixed into tomorrow night's pesto.

Mix all of the biscuit dry ingredients together, cut in the shortening and mix in the milk to form dough. Set aside.

Sautee the onion in olive oil until it starts to soften. Add the mushrooms and cook until most of the liquid is gone. Put aside in a bowl. Cook the bacon in the pan, drain, and add to the mushroom/onion mixture. Scramble the eggs and add to the rest of the filling.

Divide the biscuit dough into six parts. Shape each part into a deep bowl in your hands, add filling, then close the top so it looks like an extra large round biscuit.

Place the biscuits on a pan and bake for about 10 minutes or until done.

Sorry I don't have pictures. I was in a hurry when they came out of the oven and by the time we were back home they had all been eaten in the car. Q informed me that they need to get added to "The List" - tried and true recipes that need to be made over and over again.

Mushroom CSA? That sounds amazingly epic. How much does it cost for the 1-2 pounds? The range of mushrooms I've eaten in my life is sadly quite limited. This would be a wonderful way of being introduced to mushrooms.

The CSA was $130 for 10 weeks. Worth every penny in my mind, especially knowing exactly who I'm supporting in the endeavor. :)