This is tonight's dinner... 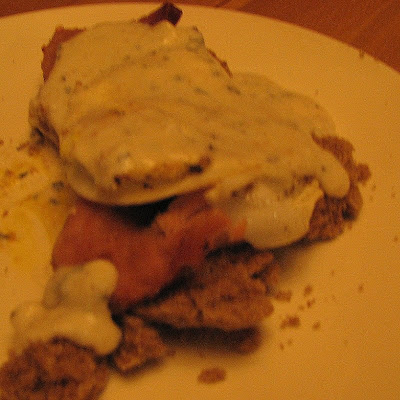 It was originally going to be biscuits topped with ham, eggs and melted cheddar cheese. We've been slowly working our way through a ham we cooked after buying it from Biancalana at the market last Saturday.

While I was putting together the biscuits, I decided to cube the paneer I made earlier this week, fry it, and take it as part of my lunch tomorrow.

For anyone who has never made paneer before, it is an Indian "cheese". If you're a cheese nerd it's not a "real" cheese because the curdling is caused by an acid rather than by enzymatic action. Basically, you heat the milk to boiling, stir in enough lemon juice to make it curdle, drain the whey from the curds, rinse, and press until solid. I've tended to press out too much liquid before I formed it into a patty and it's been a little crumbly the two times I've made it. This last time, I added lemon juice a little at a time to see exactly how much it took and formed it while there was still a fair amount of liquid left. It turned out beautifully creamy and uniform with a smooth texture. It's never melted before as I fried it for saag paneer. This time, when I looked over at the pan, it was turning into a gooey melted mess. New plan...

I made a roux with flour and butter, whisked in milk, cooked until thickened into a white sauce and then stirred in the cheese bits that had been partially melted and then rechopped apart. I knew the resulting sauce would be super bland so I started salting it. I also added some dried parsley, pepper, and garlic powder. By that time it was palatable but was missing a certain zing so I threw in a few tablespoons of white wine. That did it. It became rather good.

And that's the story of how we had "eggs benedict" for dinner...with ham instead of Canadian bacon, biscuits instead of English muffins, and cheese sauce instead of Hollandaise. Q says that that's about on par for my usual substitution habits. ;)

Over the weekend we went to the inaugural Fill Your Pantry Market and stocked up on pinto beans, red and white wheat, rolled oats, honey, squash, potatoes, and onions. It was successful beyond their wildest dreams, they ran out of a bunch of items and the lines were absurdly long. They said they'll work out some of the kinks before next year. It was great getting to buy direct from the farmer and pay slightly less than retail.

Here are our purchases along with those we picked up for friends. 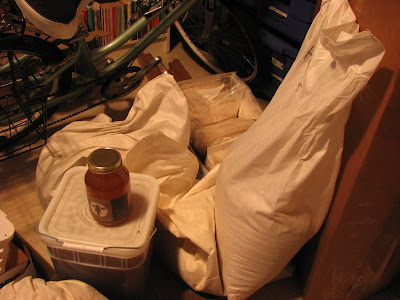 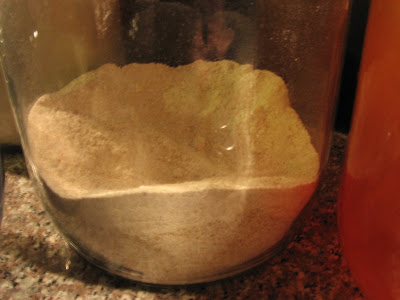 Here's the first batch of flour ground from our new wheat. We got a new Kitchen Aid Grain Mill attachment on sale a few months ago and so far (based on its first trial today) I like it better than the old Magic Mill grinder we'd gotten from Q's mom. It's way less dusty, quieter, and seems to do the job just as well.


I've been super busy but have been failing at getting pictures of the projects. In the last two weeks, I/We've...

1. knit and designed three hats as gifts for friends
2. Got about 4" of the Hawthorn Sweater completed. I'm adapting the pattern to make a cardigan using some dark brown sock yarn I bought several years ago because I needed a brown cardigan. (I still need the sweater...I can just feel that this is the year!)

3. Made progress on the bedside tables we're making at the University Craft Center wood shop. We have class on Tuesday nights but have gone in a little between classes since we're adding a shelf and a drawer to the basic table that was the purpose of the class. 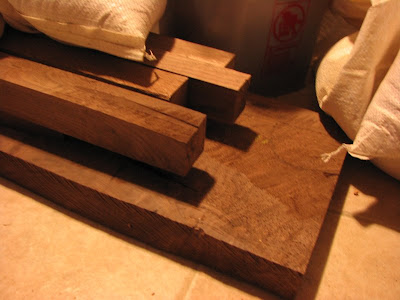 Here are the scraps, enough to do something else cool. They're black walnut so they will match the cedar chest we were given this summer. So far we've got the aprons and legs milled, the legs have mortises cut, and the tops and shelves are almost milled and glued up. Hopefully, I'll be able to do a full post on the completed projects around Thanksgiving. 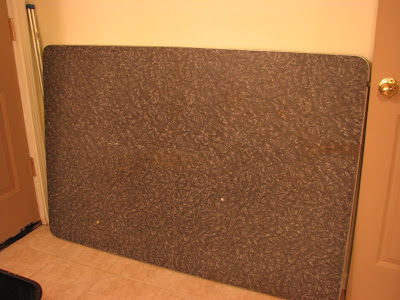 We got this table top at Bring that matches the '50s feel of the cabinets I inherited from my grandmother's house. Q has now stacked the washer and dryer. He's going to cut the table top down and make it into a counter. There's going to be a huge laundry sink set into it, the litter boxes will live below and the trimmed edge will hopefully be repurposed as a backsplash to give the whole thing a finished look. Sooooo excited... :)

5. Made cold cream (seems more like body butter to me) and lipstick with my class as part of Organic Chemistry. We're going to make them each a tube of peppermint lip balm tomorrow. Considering how super cheap ingredients (mineral oil, beeswax, paraffin) can be transformed into body products, I'm pretty sure I'll never buy lotion or lip balm ever again. It's also made me want to finally dive in and make soap. (Although that's a whole other layer of complexity.) I'll do a proper post on the lotion and balms as soon as I get pictures taken.

I'll try to get better at posting more regularly again. It's not that I don't have things to say (as if I ever run out of things to say). :)
Posted by Liz at 7:14 PM