I got assigned to make 120 cookies for the school's Halloween festival. The 7th grade teacher (a baker in a former life) was responsible for finding the recipe and then each of the three middle school classes were assigned 120 cookies for a total of 360. It's a great recipe and they end up soft and almost cake-like. I don't know where it came from but here it is...

Cookies:
Mix together in a bowl and set aside:
Cream together with a mixer until fluffy:
Mix in:
Add the flour mixture and mix until thoroughly incorporated. Measure out 1/4 cups of dough onto a greased cookie sheet and gently shape and flatten with damp hands to make 1/2" thick disks. Bake at 350 degrees Fahrenheit for 8 minutes, rotate pans, bake 8 minutes more. Remove from oven and cool.

When the cookies are cool, drizzle glaze (see below) over them and allow it to set.


I started the cookies at school on Friday and gave my class some as a Halloween treat. I brought the rest home to add to what I was making Saturday morning. When I unpacked them I was irritated to learn that I had packed some up while they were still slightly warm and they had fused together. I had to make an additional batch, but what to do with pieces from about 8 large broken cookies?

And so Pumpkin Spice Tiramisu was born! 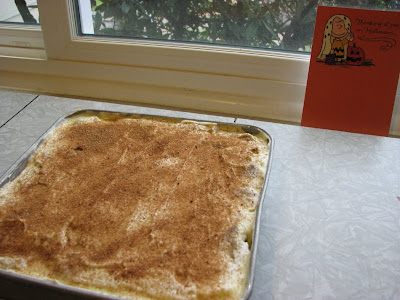 We used this recipe and replaced the ladyfingers with cookie pieces. The only other change was sprinkling the top with cinnamon, sugar, and nutmeg instead of cocoa powder. We had dinner guests last night and it was delicious then. It was even more delicious this afternoon after the flavors had more time to blend.

Now it began feeling like some nonsense children's story. In using up the broken cookies (and solving what to serve for dessert at our dinner party) we had created 6 egg whites that currently had no use. Back to the internet and... 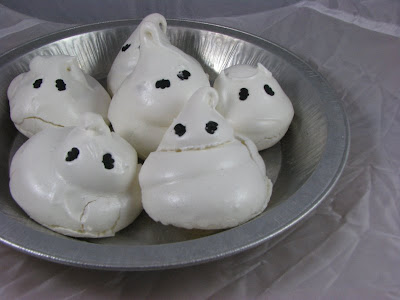 One of my students at the party I took them to pointed out that my devil meringue... 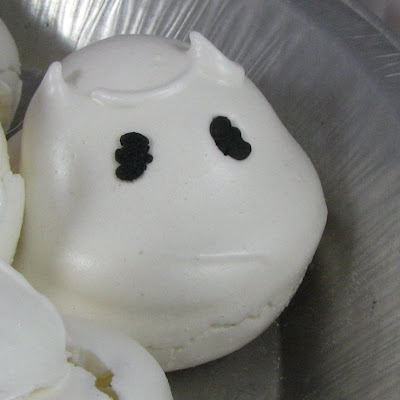 doubled as a Dracula meringue.. 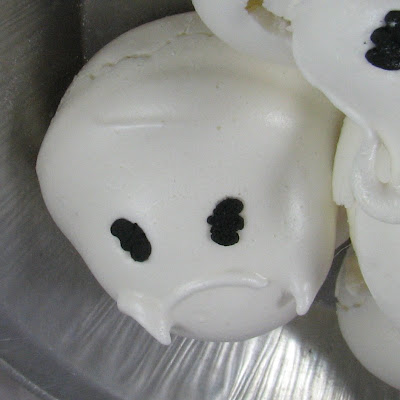 Although he looks a bit like Cthulhu in this picture.

I should have whipped the meringue even more because the first few had good body but then they got a little droopy. The eyes were some Halloween bat shaped sprinkles from the bulk foods section of the grocery store. There was enough meringue left over after making the pan of ghosts that I spread the rest out flat and made a pavlova-like crust. Add some vanilla yogurt and defrost some strawberries and it's a pretty good treat in and of itself. (Not as cute as the ghosts though.)
Posted by Liz at 9:10 PM

I love tiramisu its honestly one of my absolute favorites. I've only made it once or twice though.

I love the little ghosts they're so cute!