The hallway of my dorm at Agnes Scott College in Atlanta, Georgia. 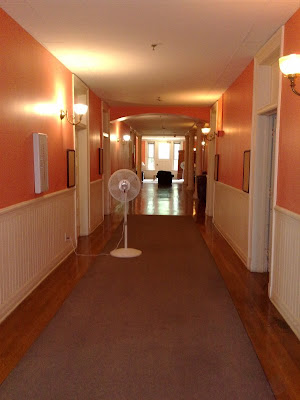 I'm spending five days in Atlanta going to the Summer AWSNA (Association of Waldorf Schools of North America) Conference. I'm the only representative from our school and I'm thrilled to be here. The conference theme is adolescence. A presenter tonight opened by making an intriguing observation - the three major transitions in every human life are birth, adolescence, and death. We don't remember birth and we can't talk about the experience after death so adolescence is the single largest event that all humankind shares that we can actually recount and examine as a personal experience. It was also a general consensus that nobody in the room has ever said, "Man, I remember 9th grade; I sure wish I could do that over again." Adolescence is hard.

It will be interesting to see what the conference brings up for how we, as educators, can help students through this time. It's a three year cycle and this first year is generally focused on distinguishing the pre-adolescent middle school years from true adolescence in high school and determining best ways to support the middle school students.

It was quoted tonight that the average age of puberty 100 years ago was 17 and that today it is 12. This tidbit seems to be backed up by this article - "In the mid-eighteenth century the average age of menarche in America occurred at over sixteen; it dropped to just over fifteen by the end of the nineteenth century, but fell to twelve years and nine months by the end of the twentieth century."

It was also stated that the development of the prefrontal cortex (responsible for "controlling planning, working memory, organization, and modulating mood") doesn't finish until the end of high school.

Yup, that's right - the latest generations of children are facing the strong hormonally driven instincts induced by puberty a full five years before their brains have finished developing their capacities for self-control, organization and planning. "Poor kids" is the first thought that comes to mind, almost immediately followed by "poor parents and teachers"! It's fascinating to me that in this light, kids really have changed in the last couple of generations - and it's not just a result of not being forced to walk to school five miles uphill both ways. :)

That said, I do believe that an overly indulgent society has not made this biological change any easier to handle. I'm also curious about what environmental changes have caused such a remarkably rapid change in human development patterns. Considering an evolutionary time scale, a huge change has happened in the blink of an eye.