After conference ended yesterday I took public transport over to the Georgia Aquarium, which was open late for their summer Friday jazz evening. It's rather expensive ($27 base ticket) but it was really worth it. There are things there that can't be seen anywhere else in the US. Do consider going to their website (linked above) to see the exhibits I mention below. I posted my lousy camera phone pictures because they're meaningful to me but the pictures on their site are really excellent even without going there. 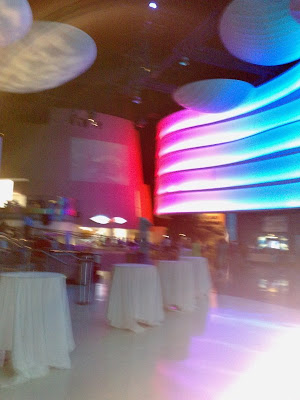 I was sort of sorry this picture of the main central area turned out so badly but, at the same time, it certainly reflects my state of mind at the time. It was very overstimulating and disorienting. I wish that it wasn't so fashionable to give all public venues a carnival atmosphere in an attempt to appeal to the masses. Their exhibits were enough to stand on their own without all the blinking lights.

I went to the Tropical Diver exhibit first and this Pacific Reef viewing window astonished me (little did I know that this was only the beginning). You can't see it here but all of those fish are brightly colored - lemon yellow, fuchsia, neon green leopard spots, electric blue. 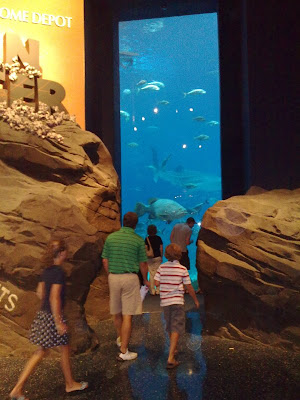 Here's the window facing the main lobby, just to the left of the Open Water exhibit entrance. It has 6 million gallons of water. Consider the scale - the fish swimming by the glass above that woman's head outweighs many adults. It is a relatively small inhabitant of this exhibit. 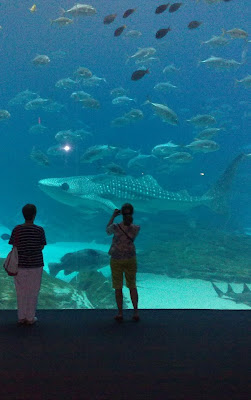 The exhibit culminates in a 60' long, 23' tall viewing window, the second largest in the world. This is a small portion of it as one of the four resident whale sharks swims by. They were the species that this exhibit was built for and are apparently the only ones in captivity outside of Asia. The largest female is 23' long right now and they're hoping that she someday may reach close to 40'. They're amazingly beautiful. I hope that being able to see these remarkable animals in captivity makes people more adamant about protecting them.
The exhibit also contains two giant manta rays (the only ones in the US) and so many other unusual, remarkable species that you just need to go here to see the full list. I really must stop gushing.

I didn't take any pictures of the beluga whales but I'd never seen those either and they give an amazing dreamlike mood. They're pure white and they were so gracefully and gently gliding through the water. One even was rotating in a spiral for a while as he swam. They provided a striking contrast to the harbor seals who share their exhibit. They were very small compared to their tankmates and were very playful, chasing each other and wrestling as they swam. 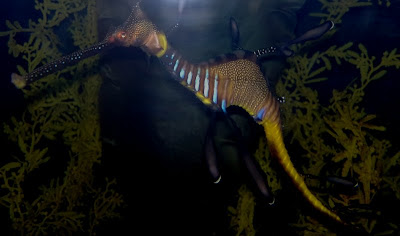 They also have many strange and beautiful smaller animals. I believe this little guy was called a sea dragon. There is a sea otter named Gertie whose favorite activity is sucking her paw as she swims around on her back, her favorite toy balanced on her chest and occasionally stroking her head with her other paw. She reminded me of a contented baby.
Posted by Liz at 7:47 PM

We live near Atlanta and have been many times. We love it and I feel very proud that you enjoyed it. It is expensive and that part I do not like. The beluga whales are my favorite. Just mesmerizing. I really think that they did a great job coordinating the music in that exhibit. Try to stay cool while you are here and enjoy the rest of your trip. I have some friends whose children go to the Waldorf School here and they absolutely love it.

Thank you for sharing your beautiful city with me! The rest of my trip was as delightful as it started. I even got to eat a true Georgia peach! :)