An Extremely Unusual Day and A Garden Update 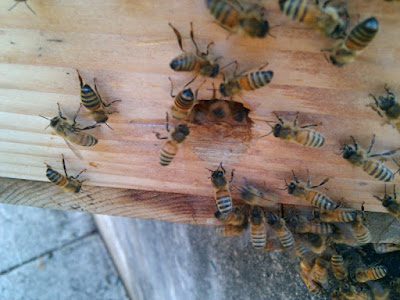 Today we had a bee swarm settle on the apple tree outside the school's entrance as they searched for a new home. It didn't seem like a good idea for them to find their own home somewhere on an elementary school's grounds so I found the coworker who helped us when we captured our swarm. The dear woman had a nuc box and her veil in the backseat of her car - talk about good luck! They were about 15' high so, with the help of a tall ladder, she carefully attempted to brush them into the nuc before passing it down to me. We tried at lunch time and again after school and both times it looked good but after a few minutes they resettled on the same place on the branch so we somehow missed the queen each time.

When Q came and picked me up I showed them to him and he was such a sport. We drove home, threw our veils and other equipment in the car and drove back down to school.

On the way back down, we got rear-ended! It was pretty minor but gave us a good jolt. Q saw her coming (looked like a young college student - in a brand new car!) but had no place to go. At least we didn't get pushed into the car in front of us. We'll get an estimate in the next day or so. It looks like they'll have to replace the bumper and there's a minor scrape/dent on the back of the trunk so I don't know how they'll fix that. 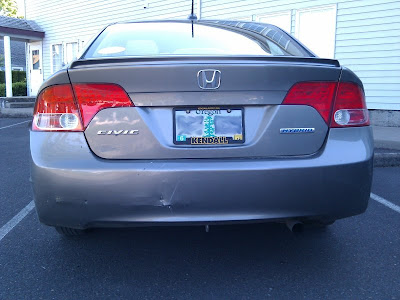 (This isn't a great picture but the crack in the bumper is visible. You can't see the way the whole thing is slightly misplaced from this angle.)

After we exchanged information, we continued on to school. With the careful application of pruning shears and Q's patience we got a big chunk into the nuc, put the remaining frames in, and put the lid on. We stepped back to watch and feared that we had failed again because a clump again began to reform on the branch. As we watched though, some bees started doing the Nassanov pheromone fanning; bee for "hey guys, the queen's over here!"
This is what they look like as they fan... 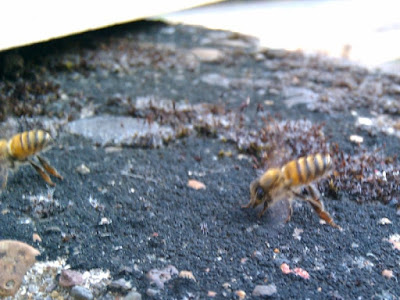 Then, they all just started going in the door, as quickly as possible, it was like a bee vacuum or subtle bee gravity. After a few minutes the clump on the tree had dissolved and after about 15 minutes most of the bees were inside. We left the nuc there for my coworker to pick up this evening. She'd been wanting another hive and this was a lovely stroke of good luck! It was a very cool experience to see. It was also nice having it not work twice. I feel like I'm gaining a lot more knowledge about capturing swarms. Here's a short video of the parade into the box...

When we got home, there was still a little daylight left and it hadn't rained all day! We got another strawberry harvest in - 4 more pounds! (We also got 3 lbs. on Friday night.) I can't believe the rate they're producing at. 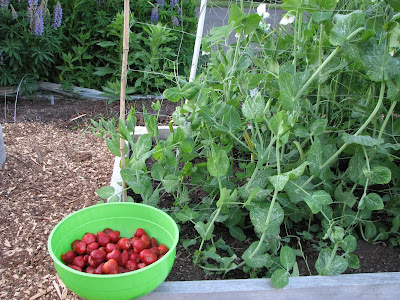 Here they are in front of the peas, which are quite tall and quickly becoming covered in blossoms. 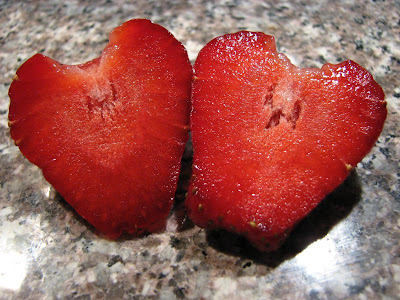 I love the way this variety is red all the way through, even the largest ones don't really seem to have the core that store bought always seem to have. 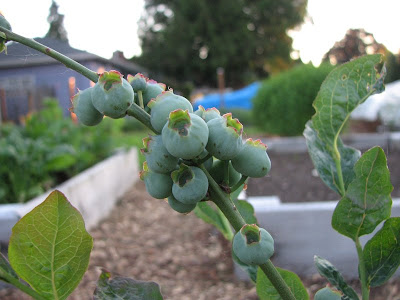 The blueberries are well on their way to ready. 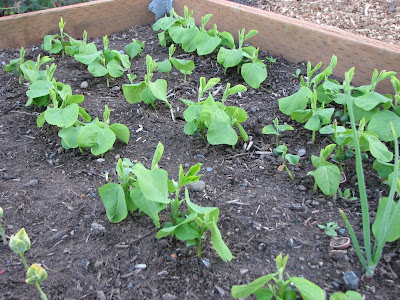 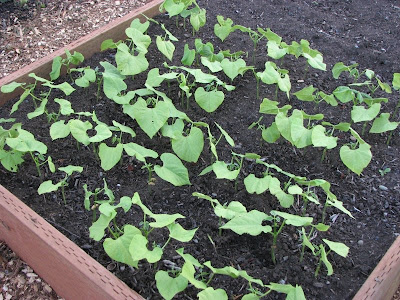 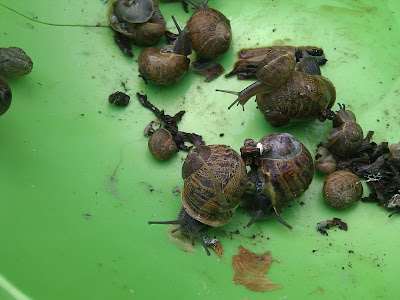 The closest you'll ever come to seeing my green bean plants! This is a small part of the collection Q took off of the house this Saturday. Slugs and snails left nothing but empty green stalks from my many green bean seedlings. They've also devoured my melon seedlings faster than they can grow. Everything else is a bit chewed on but seems to be winning the battle. We've got to stop having all this wet weather. It gives them too much of an advantage. 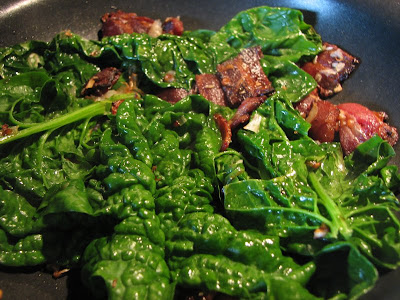 I made spinach bacon omelets for breakfast Sunday. I love the brilliant green of spinach as it just starts to cook. I harvested another 12 oz. of spinach and froze it tonight. The silly plants are already bolting. I think I'll try for one more crop since it's such a cool wet spring.

After reading this I caught an episode on A&E of 'Billy the Exterminator'. He was called out to remove bees (he relocates animals... in this case to a honey farm). Not kidding- this bee hive was in a wall of a garage and it was 6 feet tall. Incredible.