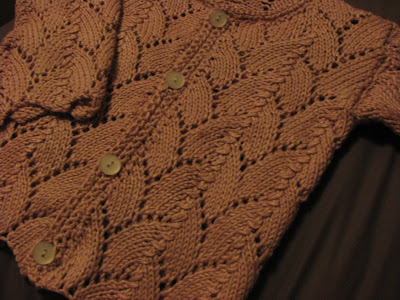 My mother-in-law was hoping to buy a size 1 baby sweater to be delivered when Q made his way to Colorado. He left this morning at 6a. The sweater was finished last night at 12a. My class play is coming up this week and I've been so busy with it that I haven't had time to do much knitting lately. I was also making up the pattern as I went, which of course led to a few "frogging" (ripit, ripit) moments, especially in designing the neckline. In the end I'm happy with how it came together though. I like the lack of ribbing. The bottom edges naturally formed cute little points due to the lace pattern and the neck just got two rows of single crochet when I did the button bands. The crochet works nicely to give the floppy lace pattern a bit of a boundary. 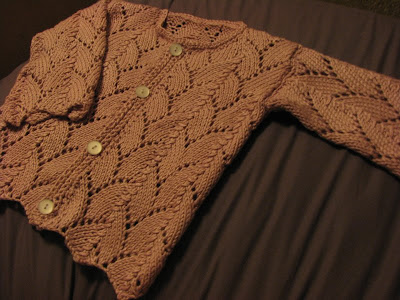 On to the specs - it's knit of Baby Bamboo (from the awesome sale I found last year), 20" chest circumference, sleeves 8" circumference. Body is 7" long from the armholes and sleeves are 7 1/2". Knit on size 6 needles using the "alternating leaf" lace pattern from the Big Book of Knit Stitch Patterns (which I love, by the way), the body has 111 stitches, sleeves 45. It's totally one of those knit in squares then assemble type patterns. The body was knit as one piece; at the armholes I cast of 2 st at each one and attached new yarn, keeping all three pieces even. Sleeves were knit simultaneously as two rectangles. Sew shoulder seams, sew sleeve seams, set in sleeves, crochet on collar and bands.

My favorite part of knitting lace is how the pieces look crazy and uneven after you cast them off and then, through the magic of blocking, they turn into these light, airy pieces of fabric, ready to be made into a garment. Anyone who doesn't believe in blocking has never knit lace.

Other interesting things that are not class play related (just gotta remind myself there are other things going on...)

Liz,
Check out this article about JO Food Revolution. I thought it made some interesting points.

All of your projects look fantastic! I wish you and Q luck with the bees and gardens!
Jamie