...Wherein the bushes get removed.

A couple of weeks ago I posted free shrubs on Craigslist. In a week's time we managed to find new homes for all of them without having to so much as lift a shovel - 15 arbor vitae, 9 azaleas, 2 nandina, 2 pieris prelude, and 9 viburnum. To think that they will all be replaced with things that make food, woohoo! 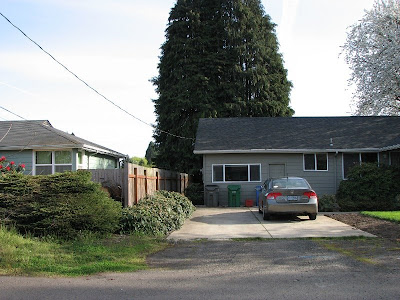 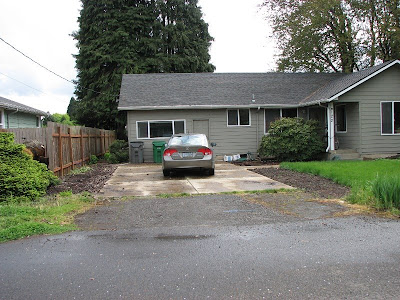 Before and after of the east side of the yard. Raspberries are going to go to the left of the driveway with the little 2'x8' bed at the very front toward the street. I'll probably grow my basil in it in the summer. Half-high blueberries to the right with a row of kiwi next to the blueberry hedge where there is still currently grass. The rhododendron is going to have to be cut down (too big to dig) and we're going to build a deck in that space with a bike shed built in on the end. The roof of the bike shed is going to have an herb garden living roof built into it. Between the front of the deck and the sidewalk we're going to have some mint. It should stay contained there. I don't think even mint can grow through concrete! (Although I wouldn't put it past it to try.) 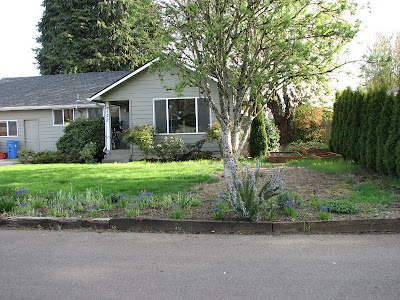 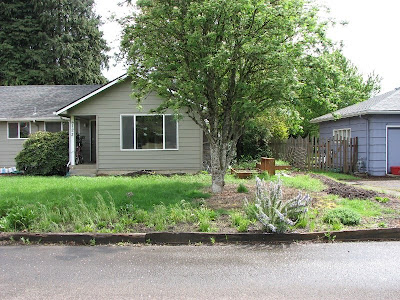 Before and after of the west side of the yard. The arborvitae are being replaced by a row of grapes to provide a little privacy from the neighbors and there will be an asparagus bed under the picture window. The two raised beds, plus another 6, are going to be moved into where grass currently is to the right of the new kiwis. The ugly tree (pardon, mountain ash tree) is getting cut down to provide full sun for all of our gardening. Compost bins and a new, narrow tool shed are going to be built along the fence where the raised beds currently are.
The bulb/herb/perennial flower bed is going to stay at the front of the yard and some small barrier (maybe a short picket fence) is going to separate it from a row where we're going to plant the Three Sisters guild in the summers (corn or sunflowers serving as support for beans with squash surrounding them).

That's the plan so far. Hopefully, we'll know even more details and some more "whens" after our next meeting with our permaculturist on Monday afternoon.
Posted by Liz at 3:47 PM