...Wherein the beds are completed and Liz discovers seed catalogs. 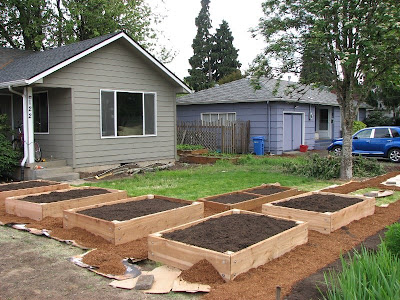 Saturday afternoon - 5 new beds; one older, smaller one that was moved.
To the far right of this picture you can see the two "holes" where the old raised beds are going to get moved once their harvesting is done for the season. One just has lettuce, spinach and peas, so that will be easy to dig out and move in late June-ish after the harvest is done. The strawberry bed will probably have to be moved in August, well after harvest and when I'll be needing to replace mothers with daughters anyway. I'm going to have to remove the crowns, move the dirt, move the bed, and then replant. Yuck. 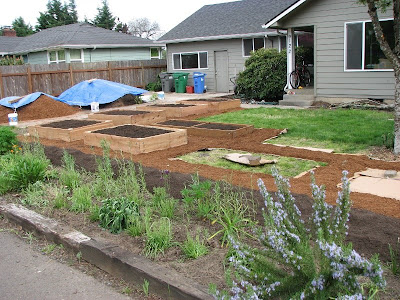 There's still a lot of dirt. At the very least we'll just move it over and store it in the places reserved for the other beds (still need more cardboard for those spots) until we decide where it is needed. Stupid choice between 5 yards (not enough) and a unit (too much). Worse things to have around than too much rich, yummy soil.
The bark still needs to be placed around the blueberries and then the remainder will be spread over the paths. I only did 2" or so to start to make sure we had enough.
It was (and is) looking quite rainy - the first time all weekend - so we tarped everything down. First drops gave us a good excuse to call it day before sunset drove us in. :) 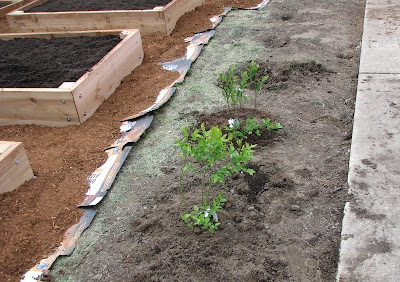 The First Plants
The first actual inhabitants of the new garden. We got two of the blueberries in before the weather went dodgy. After all of them are in we'll put weed barrier over the whole bed (X's cut for the plants) and bark it. Should look really nice and just blend right into the raised bed area. They're supposed to get about 4' high and they're spaced so they should form a nice little hedge in a few years.
We bought starts of broccoli, Roma tomatoes, slicing tomatoes, green pepper, cauliflower, and acorn squash today from a nice local fellow. (His last name is Zwink so he gets extra bonus points too - Z,W and a K!) For our break (I needed new gardening gloves) we also went to Down To Earth. I knew we needed some seeds and that I want open-pollinated/heirloom varieties, so I started looking. In finding this info I was drawn into actually looking in the catalog. The catalog full of intriguing pictures, beguiling descriptions and costs only $.25 Oh dear, I'm in so much trouble - 140 square feet of empty garden beds and currently owning only 15 or so starts. (By the way, my basil starts look so cute in Q's office window. I hope they make it this year.)

Territorial Seed Company is based out of Cottage Grove (20 miles away), so they're local, which is nice. The garden specialists at Down To Earth suggested holding off on most of the direct ground stuff (corn, cukes, beans) for about 2 more weeks in our area, so I put the seeds I'd chosen back and just took the catalog home instead. Little more planning time/fun before I commit! 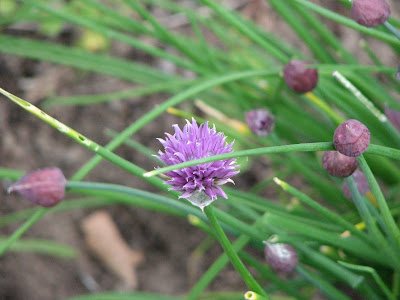 Q took the pics so there was the requisite artsy macro nature picture waiting for me on the camera with the boring utililitarian shots. The chives really are beautiful right now and Q is quite good as a photographer (as well as being a phenomenal raised bed builder).
Posted by Liz at 7:18 PM

Wow! It looks like a huge project, but really makes your front yard so organized! Do you have room in your backyard, or do you already have gardens there?

Good luck with finishing the project! Looking forward to pictures!

We are actually going to start on the back once the front gets put together. We're taking out some big cedars that have killed everything in the yard and are going to put in a pecan guild - almond tree below, then goji and goumi berries beneath that, with yerba buena and other herbs as groundcover. It's the space we use for entertaining, so we'll probably also put in a table and give the grill a home where it isn't quite so exposed. If only time and resources were infinite. Of course, I suppose there wouldn't be any fun in that. :)