What I would do with two free hands...

It's lucky she's so cute because there is a lot of work around here that isn't getting done (or done veeeery slowly) because of her. As sweet as these newborn days are I'm hoping she'll start being able to nap in the crib in a couple of weeks rather than in the sling on my chest. 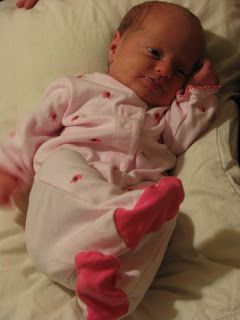 Q has taken on the Whole 30 Challenge with a bunch of people at his gym so I'm counting down the days until October 12. I feel very guilty about continuing to eat several things that he's abstaining from right now - grains, dairy and the occasional sweetened anything being the major ones. There are benefits though -
1)We're eating way more veggies than usual and I'm surprised by how many meals don't really need the grain that they're usually served with. Tacos are fantastic wrapped in iceberg lettuce instead of tortillas. A vegetable and chicken curry is just a delicious thick stew without rice beneath it (although we were careful to not make the flavors strong enough to be overwhelming when it's not cut by rice). Especially since grain growing and processing is so labor intensive it's nice to seriously look at how much of them we really need to eat.
2) Q's been doing most of the cooking - and he's a fantastic cook! 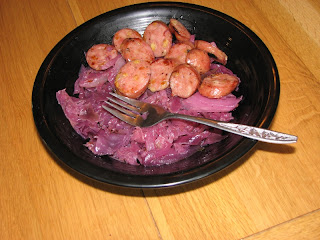 Here's the braised cabbage with pan-fried chicken-apple sausage that was dinner on Saturday. Every woman should marry a man who can cook. He's even been feeding me "birdie bites" when I'm nursing Willow and don't have hands and things just smell *too good*.
Amusingly, most of the stuff we seem to be harvesting lately is not on his current diet. Last week's marinara and curry were made with almost exclusively homegrown ingredients (have I mentioned the pound of garlic we harvested?) but the big crops we planted that are just coming on now are currently forbidden - edamame, potatoes, corn, and oats. The edamame is in the freezer and the oats are still waiting to be threshed and winnowed. 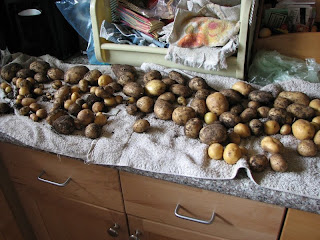 Q dug out the two little potato patches I planted on a whim this spring when some rotten potatoes started sprouting in the compost bin. Ten pounds isn't bad for a crop that had no financial outlay and about an hour of time put into it. 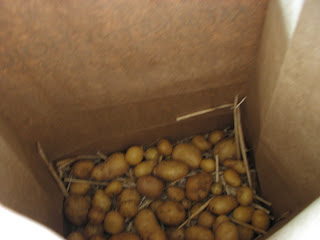 We packed them in a paper bag with alternating layers of straw and potatoes. After the main crush of summer produce is done I'm going to try to fit the bag into the fridge since we still don't possess a location with appropriate root cellar conditions.
I started making a dent (literally) in the corn "field" today. 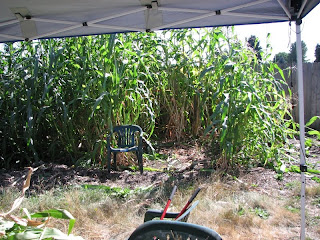 After I strip off the ears, the stalks get chopped off at the base. I'm cutting them into 4-5' lengths and have been setting them under the canopy to dry out. 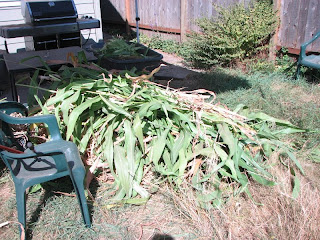 They're sitting on the large pile of oat straw I put under cover a couple of days ago when it started looking rainy. When the stalks have dried thoroughly the current plan is to send them through a chipper for composting or path mulch.
I got about an eighth of the bed done today and got 30 ears (not including the little unripe ones that went to the grateful chickens). 8 x 30 = a whole lot of ears of corn, especially since Q can't eat any of it fresh this year. Normally, I'd be worried that over 200 ears wouldn't be enough to fulfill his seasonal sweet corn appetite. As it is, the neighbors got a dozen of the prettiest ears I found and the rest of today's pick got blanched, cut from the cobs, and frozen for winter. 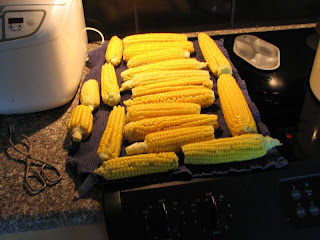 There's a lot of this stuff where I feel like we're working against the clock because Q goes back to work next week and the little that has been done is because we're taking turns on baby duty. Of course, one way or another it will all get done to some level and it will all work out. After all, there isn't really an alternative. If the big jobs get done, all I'll be left with is the regular tomato pickings and small batch marinara making and freezing, which can be done with a baby tied to my chest.
Green peppers were on sale at the farm this weekend so we got 1/2 gallon of diced peppers into the freezer. Tomorrow is canning diced tomatoes with a friend. Saturday (Willow's one month birthday) will be apple picking and applesauce making. I'm so grateful that Q's such a willing helper and participant so we'll be able to eat locally and well this winter.
Posted by Liz at 5:50 PM