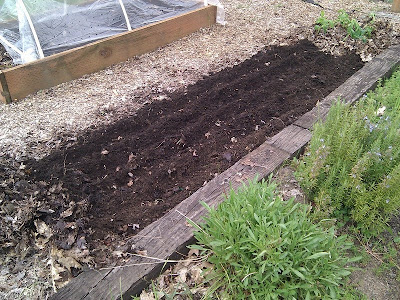 I planted more potatoes that had been trying to grow in the compost bin (see the green tops to the right in the picture above). The furrows had Sayamusume edamame planted in them and we covered it with a clear row cover to keep the ground a little warmer and keep the crows from getting any ideas about a buffet. The bed in the background was also cleared of leaves and planted with Japanese hulless popcorn. The row cover is in place for the same heat/crow deterrent reasons. I also got our first harvest of the season - 14 oz. of rhubarb. The first tiny green strawberry was also visible today.
Q did a bunch of weeding (although it seems like it never really makes a dent) and got the compost piles turned and combined. We're filling the two empty bins with the leaves that are coming off the beds. We screened enough finished compost out so I can put a scoop in with the starts when they get transplanted.
Yesterday, we spent all morning at Q's CERT "final" at the fire fighter training center. Two of my students came as well and, along with about 25 other people, we got to be "victims" of a disaster. The leaders used a bunch of makeup and fake blood to give us gruesome wounds. I had a nice head wound and my tag gave me a slow breath rate, normal pulse and capillary refill, and a mental state of "oriented and responsive but sluggish". My students came after I had already been made up and even though they knew it was fake it gave them a start at first glance. For each group of rescuers we had to act our part and let them practice assessing and taking care of disaster victims.
Q and the rest of his classmates rotated through five different scenarios - putting out a fire using a fire extinguisher and fire hose; light search and rescue in low visibility using the "smoke house"(simulates a smoky environment but doesn't have the health dangers of real smoke); debris stabilization and moving; and the "victim" scenario, running it once as part of the triage team and once as part of the medical team.
High school students can play victims for graduating CERT classes (they run 2/year) and get credit for their community service hours requirements. It was actually really fun and we learned a lot just through what we needed to know for our roles.
Last weekend was cooking weekend. 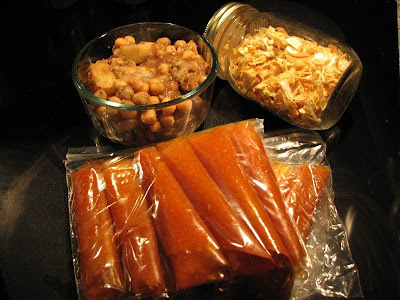 My class leaves for our 8th grade trip on Wednesday morning. We will drive down to San Francisco, spend two days there, and then head up to an adventure camp in the Sierra Nevadas for five days. We get back on Thursday, 5/26 and have just three school days before graduation!
I've got blog post scheduled to post daily for the next few days detailing some of the other things we've been up to but I hadn't gotten around to posting about.
Posted by Liz at 8:21 PM