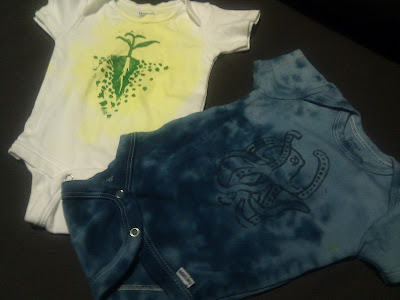 Earlier this year, my students made linocuts and block printed on paper with their art teacher. At the auction, our baby basket included two four-packs of plain white onesies. The blocks were sitting in our classroom so I asked them if they would be interested in block printing tee-shirts for themselves and helping me with the onesies if they had a inclination. The response was enthusiastically affirmative but they also wanted to tie dye the shirts. It sounded like a very fun end-of-year project so I subjected Q (willingly) to a crash course in tie dye and fabric block printing. In the picture above, he designed and made the sprout onesie and I did the octopus.
Here are the student's designs. Each block was made by a different student and, for most of them, that student did the dying and printing. 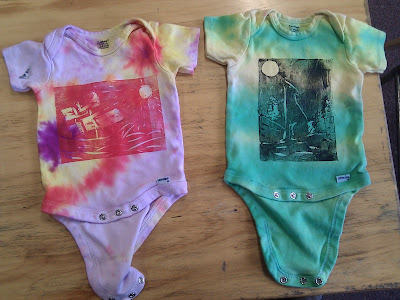 A ship at sea and a howling wolf 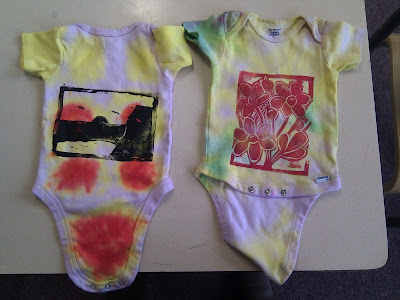 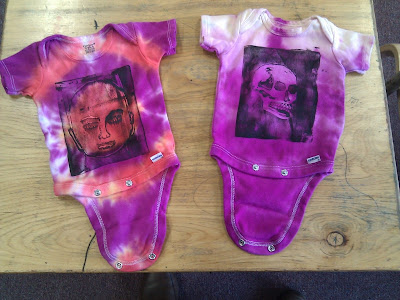 Human head (I think it looks like Buddha) and skull
I think it will be so much fun to think of them as I'm dressing the baby this fall - not to mention that we'll have one of the most stylish babies in Eugene.
By the way- they named the baby by taking the last letter of each of their first names and combining them into one word. They're disappointed that we're not planning on naming the baby "Meeyanica". I was pretty impressed that they managed to make something pronounceable and relatively attractive. I suppose I'm lucky that there are only nine of them or it could have really ended up being a mouthful.
Posted by Liz at 9:10 PM