After rain thwarted our building efforts and the chicks had to live in the bathroom for way to long, the new coop was finally made habitable last weekend. Q designed it based on lots of research on other people's coops and we think it ended up costing about $300. We did use almost all new materials so those costs could probably be cut way down. The layers live here now and the meat chicks live in the tractor. 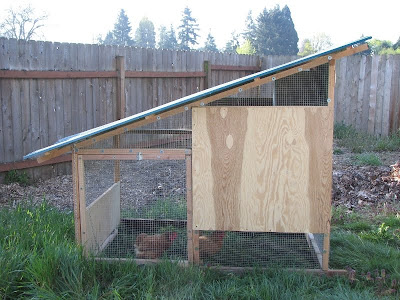 The footprint is 4x6 and the bottom frame where it touches the ground is made of cedar. There are extensions on the "heavy end" (right, in the picture) that will have wheels attached so it can be lifted and rolled like a wheel barrow with handles on the other end.
It fits perfectly onto our raised beds so we have to option of using in on a bed, secured with carriage bolts to keep it from slipping. 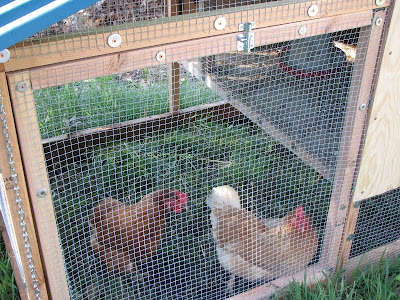 There is an access panel to the small run that is held in place by two slide bolts. All of the hardware cloth is held on with washers and screws. 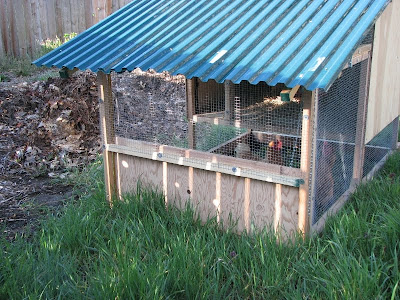 This panel on the end will completely lift up to let them into the larger run when we get that set up again. We need to make some adjustments to the door's chain pull because we hadn't accounted on the weight of the door. Smaller chain and another eyelet to help the feed should take care of the problem. We used metal channel we found at BRING to set the doors. 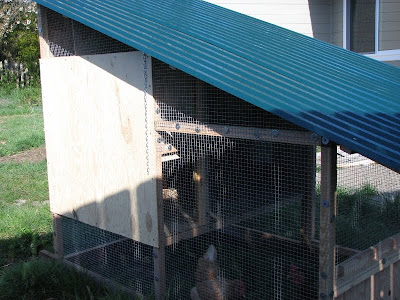 From this angle, the small door that leads into the coop is visible on the interior left. (It's the same chain and channel arrangement as the front.) This will allow us to lock them into just the coop area for transport or run cleaning. The interior coop area has hardware cloth between it and the small run. We're going to also have a solid panel that fits in that space to protect them during harsher weather. 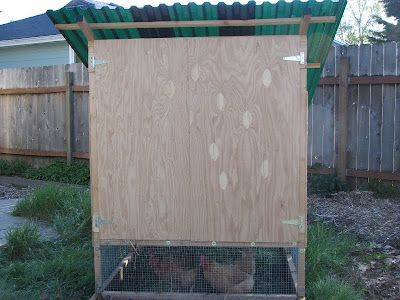 Q hasn't added the latches to the back access doors yet. Currently, we have to bring the electric drill with us to check eggs each day. Eventually, it will be possible to open just one at a time. 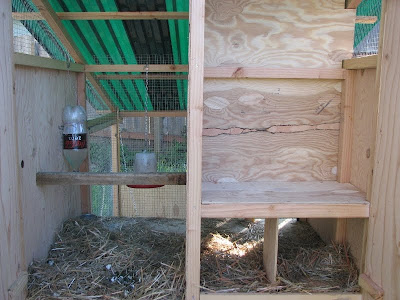 Here's the inside after the doors are open. Their food, water, grit, and shell all reside to the back left in the photo, behind the roost. There are two nest boxes in the front right and there is a storage area built in above them. They have been very courteous about using the new nest boxes and the manure pile suggests they're using their roost at night.
We're going to be on the Eugene "Tour de Coop" this year and I think Q's looking forward to showing off his handiwork.
The young ones seem rather satisfied with their new outdoor life. I think they're about two months away from harvest. Eugene Backyard Farmer is planning on getting a shipment of meat birds in in August, so assuming this little experiment ends up working out well, we'll probably be raising another, slightly larger batch during late summer and harvesting in time for stocking up the winter freezer. 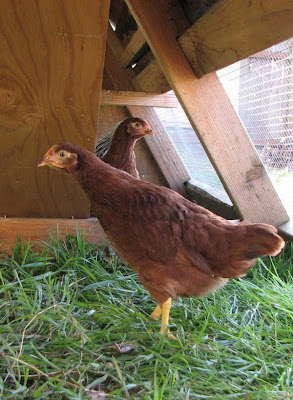 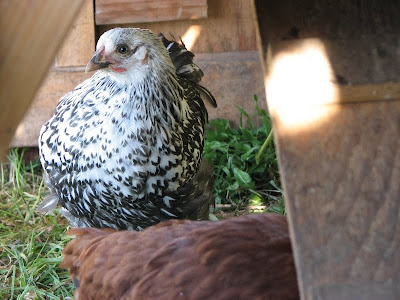