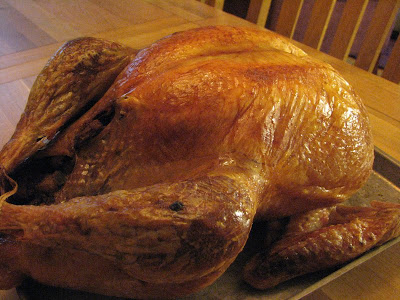 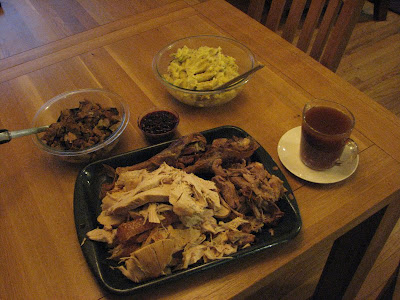 I don't know if the never frozen, biodynamic, free-range turkey made a difference, if the stars aligned just right, or I'm just becoming a better cook but this year's meal was by far the best I've ever made. We just made the stuffing, mashed potatoes, turkey, gravy, and cranberry sauce today. Since it's just the two of us I'm luxuriating in making our Thanksgiving in parts. The cranberry salad is tomorrow. Haven't decided if pumpkin custard is being made tonight or tomorrow.

Q paid me one of the nicest compliments I've ever received as he ate tonight. He said that over the last couple of months my cooking has gotten to a whole other level. That it was always good but now it's really great. I guess I'll keep cooking for him. :)

Besides all the big things I have to be thankful for I was especially grateful for living in such a fertile state today. The Thanksgiving dinner ingredient roll call...

Turkey, potatoes, onions - Culp Creek, OR (40 miles) (biodynamic)
Cranberries - Bandon, OR (130 miles) (organic)
Celery - front yard (harvested just before cooking)
Sage, thyme, bread, salt, sugar - who knows
*** I know I could have made the bread from local ingredients and gotten the spices local but there's no need to be pedantic, is there? ***

I realized we're really getting a lot better on the local eating front. Tuesday's Beef Stew was made with local beef, beef stock (from scratch), turnips, rutabagas, carrots, rosemary, and red wine. Only the salt and thickening cornstarch were imports. Wednesday was chanterelle's in white wine sauce over egg noodles. Noodles were imported, everything else (except the salt) was local.

Tonight I made the marshmallows for tomorrow's salad. I ran out of corn syrup a while ago and didn't want to buy more so I used a substitute recipe. I think it worked although I don't think the sugar completely dissolved. This may be because I made a 1/3 recipe of the syrup and then directly added the marshmallow ingredients while it was still hot. Maybe make the syrup ahead of time, cool it and then make the marshmallows? Eh, the sample I took is good enough for me, only a tiny hint of crystals. Cranberry salad will be local cranberries, walnuts, and cream; homemade marshmallows from imported sugar; and pineapple from Hawaii. Some holiday traditions are just required though.