The Driveway is Empty 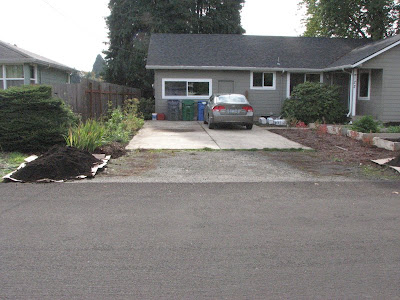 Yes, it really took over 4 months to finally disperse the last of the soil pile. It's weird having a whole driveway again.

In a true me-like moment, the reason the dirt getting moved made top priority is because I'm hoping to get the City to deliver 7 cubic yards (the only size available) of dead leaves on our driveway. Grass and weeds are in several places where they have no business being and hopefully sitting under a foot and a half of leaves all winter will kill them dead dead dead. Anything that hasn't disintegrated into nothingness by the end of the winter gets thrown into the compost bin and it's a win from every angle.

Due to the time sensitive nature of this endeavor and the relative lightness of leaves, I'm anticipating that the leaf pile will get much more quickly dealt with. After that, I'm considering pressure-washing the driveway to discourage any more hare-brained schemes for a while.

Once the leaf mulch gets put down the garden will officially be put to bed for the season and I'll just keep occasionally checking my three winter beds, ready to throw protection over them if a serious frost is expected. 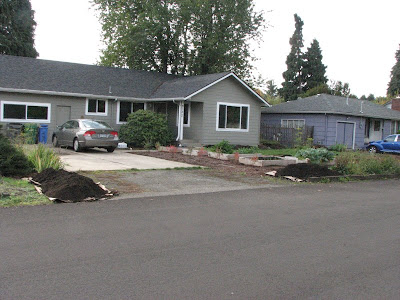 (Sidenote - don't the new windows look nice? I'm in love with them.) 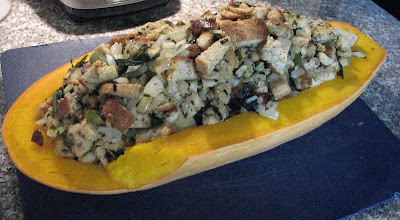 Finally, the fate of the banana pink jumbo squash. I baked this half for about 25 minutes, cut side down, then turned it over, filled it with bread stuffing and baked it, covered with foil, for 35 minutes more. I should have used more butter in the stuffing and should have baked the whole thing probably about 15 minutes longer to get the squash really mushy. It was delicious anyway and served as our primary food source for most of the weekend. The other half got baked later (only one half fit in the oven at a time!), cubed, and frozen.

On Halloween Day, I pulled out the last of the vines and brought in my last 6 pumpkins. (I'd harvested 3 before.)
One was ripe - stuffed pumpkin or pumpkin soup in its own shell for dinner later this week? One was irrevocably green. I found recipes online that suggested paring it, slicing it thin and baking it like you would apple pie. I will report that experiment's results when it is completed.
Four were not quite ripe. The handy internet suggested placing them in a bag with apples. Apparently, the apples release ethylene gas, which will ripen the pumpkins to orange. It warns about less flavorful pumpkin but that's what nutmeg and ginger are for, right? Another experiment that I will report on when I learn the results. Pumpkins are currently locked in a box surrounded by Jonagold and Golden Delicious apples from Thistledown.

We siphoned the pear cider off into the other carboy on Saturday. It seems like it's going to end up tasty. A little weird right now but the apple was also not as fantastic when it was totally fresh. We're letting it sit a bit longer to clarify and then we'll probably add more sugar to get it nice and sweet like I like it, used Campden tablets to kill the yeast, then bottle it.
The last bottle of the apple cider was drunk on Halloween night. It was very bubbly and very alcoholic. Fermentation had continued quite nicely, even in the fridge. I know it's desirable to have it a bit bubbly but I'd like a product that can age for a few weeks at room temperature in its bottles this time, even if that sacrifices sparkle.
Posted by Liz at 8:28 PM