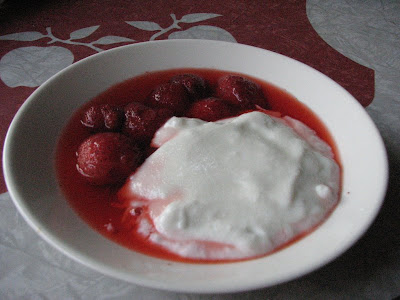 (Update 9/4: Camera all better so picture was added)
No pictures today (the camera's acting strangely and Q needs to get home to look at it) but I needed to report that we made yogurt for the first time. It is remarkably easy. We followed the basic instructions from this article except we had a little less than half-a-gallon (minus one glass for Q with chocolate cupcake) and I used a whole 6 oz. container of Plain Organic Nancy's Nonfat Yogurt.

After heating the milk on the stove, we cooled it to 115 degrees and added the yogurt. Covering it with the lid, we put it in the oven, which had been set on warm for a couple of minutes before being turned off, and let it sit overnight.

The next morning, Q put a thin towel into a colander and poured the mixture into it. Not much drained and he had to leave the house, so he put the whole colander, covered with the lid, in the pot and refrigerated it. This morning was the first chance I had to deal with it. It had drained a lot and only produced about 2 cups of yogurt at the end.

I don't think I'd let it drain so long next time. It's fantastic, mild and creamy but it's a little...gluey? A bit more cohesiveness than yogurt usually has. I'm curious if it has to do with how long we let it drain, the fact we used skim milk, the fact I put in more starter than it officially called for or ? The article mentions how the originally heating changes the proteins. I don't know if maybe I didn't heat it hot enough originally and that could account for it too. If anyone out there has theories, do share.

I'm still enjoying it immensely. I mixed in about a teaspoon and a half of vanilla. There was supposed to be a picture of my bowl, one side full of creamy white yogurt and the other full of fat strawberries, defrosted from this year's harvest. I've also been sprinkling about a couple teaspoons of sugar on my bowl to supplement the sweetness from the fruit. I figure that still has to be better than store yogurt, which I suspect has a great deal more sugar as well as all the stabilizers and preservatives. Hmmmm...maybe the next batch will have a different texture because it won't have so much of the original stuff in it...something in the stable shelf life yogurt maybe affected it. I'm going to get more milk and process another batch when I just have a quarter cup or so left of batch one.
Posted by Liz at 7:19 PM