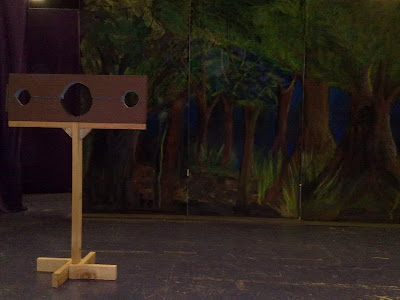 Robin Hood was performed spectacularly by the 6th grade on Wednesday and their grateful teacher breathed a huge sigh of relief. Above is a picture of the styrofoam stocks (they look even better up close where the "wood grain" is more noticeable) with the chalk backdrop. Can you believe that 6th graders did the drawing? They only had planning help and minimal input by a generous parent volunteer. 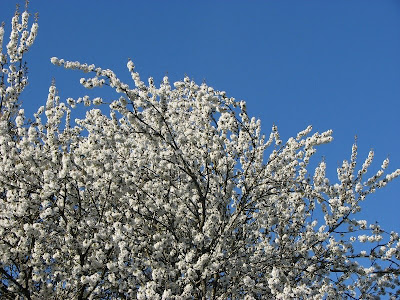 The cherry tree in full bloom last week. We've been having petal showers for the last few days - one of my favorite things in the world. 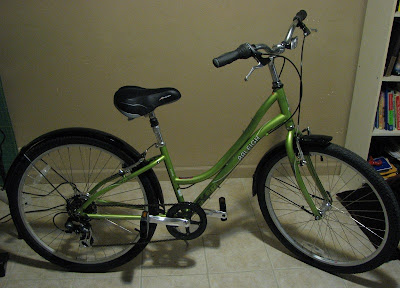 So, you know any weekend that starts off buying a bike on Friday afternoon is going to be great. Paul's Bicycle Way of Life had this in stock on Wednesday when we went to look but it wasn't built up. I'd test-ridden a men's gray one before and loved it and finally decided that this was the bike for me. So I went in on Friday and discovered that it was green! *swoon*
Grocery Bike, as she was affectionately known, is a Schwinn Mirada from the late 1980's and was quite heavy, although she did the job. The new one has already been christened Girly Bike (due to my propensity to bounce up and down on the seat as I ride, chanting "girly bike, girly bike"). At least she'll still be "G.B." for short. We rode down to Saturday Market to test her out and she's so great.
From a sort of all-terrainy hybrid bike to this is so fun. It's a totally around town commuter and I get to sit upright on a big cushy seat. The bar is so low that, as the bike sales guy pointed out, I could ride it in a skirt. (In my head I added, "and still preserve my lady-like decorum" - sales guys don't talk like that though.) I know she'll be heavier once Q transfers over the baskets and that some of her charm will be offset by the toe clips (but I've gotten to used to them to not have them), but she's pretty great. Raleigh Venture 2009, a.k.a. Girly Bike, I love you.

So, today (Sunday) we made a spontaneous trip to Portland to check out this shop to purchase this bag for Q. He's been looking for a bag smaller than the usual messenger, larger than the usual "man purse" and pocket-y enough for all of his stuff for a long time and we think this will finally fit the bill. And it's an Oregon company, what could be better?! 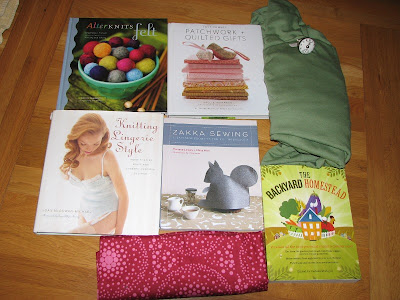 Above is the weekend swag...
(bottom right)The Backyard Homestead- a purchase that has a little bit of everything from how to grow grapes to raising vegetables to keeping chickens, ducks, and even swine. As we go all "permaculture-y", I see myself using this as a great starting resource for lots of projects. (It even has a little box on how to make your own pectin!)
The other 4 books were purchased at Powell's, three of them on really good sale.
I've wanted Zakka Sewing since it came out just because I love the squirrel tea cosy from the cover, recognizing that I will never make it as I would never use such a thing. It has got a couple of other great looking projects though, including some delightful double-layered, leather bottomed house slippers.
Knitting Lingerie Style has a lot of info on shaping and a pattern for some cute knit leggings so I'm planning on using ideas and not actual projects extensively. Q just also empirically liked the book, so, of course, we had to get it. :)
Alterknits Felt just has a lot of great design ideas and Q thought we should get it as design inspiration because it was just that pretty and just that good a sale.
Last Minute Patchwork and Quilted Gifts was not on sale, but it was what we originally went in there for. I needed this quilt pattern. I'm planning on spending the next 2 or 3 years with a stack of fabrics in rainbow order stashed somewhere, occassionally getting changed and "improved" until I finally get around to making it. I'm wounded by the idea that you can just buy collections of the fabric to do it. It seems like it's taking half of the fun out of it. I'm already monkeying with ideas on how to incorporate the colors into other blocks, strips on the outside to extend the pattern into something that's more bed-sized. Me and my inability to actually follow a pattern exactly as written.
The green knit fabric was super cheap at JoAnn's (3 yards was only $6) and it's going to help me learn to sew knits. I'm pondering a shorts pajama set or a knit dress patterned on one I already have and like.
The pink red fabric was discovered on clearance at The Fabric Depot in Portland where we went hoping to find some more of the Amy Butler Bright Buds Aqua to finish the guest room motif. (Failed there, guess I'll just have to bite the bullet and get it online.) I got the last 1 3/8 yards. Hopefully enough for some flirty (but knee-length) sort of gusseted skirt. Right now I've got a little back up of sewing projects, which I'll hopefully get to soon. I'm quite in love with all of them though, so I'm not lacking motivation at least. Thankfully, the argyle cardigan order is quite close to completion without any orders behind it, so... (Of course, I have the Pac-Man beanie design, Space Baby sweater design, and Steampunk Cogs fingerless mitt designs that I've created that all need to be test-knit but... :D) 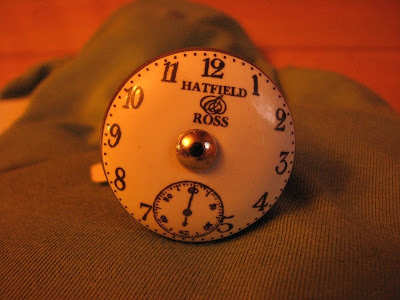 Q always lets me stop at Pudding on the Rice on the way home from Portland for rice pudding (mine had maraschino cherries and chocolate chips today) and while we were at the complex we stopped at Anthropologie, where we found this great hardware. It's going to go on the pantry door. Currently there is a hole that has a piece of string threaded through it to serve as a door handle. Perhaps such an adorable little knob will make me actually close the pantry, instead of leaving it open all the time. (I can't help that I like looking at all the pretty, full jars.) 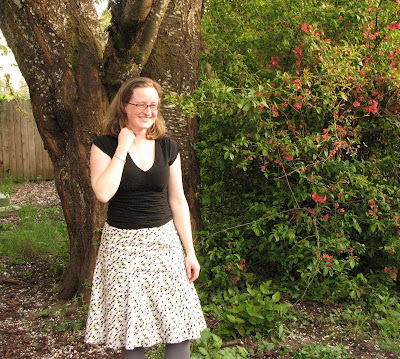 Me in my thrift store find of the weekend - a very cool $3 skirt. You can really see it but it's got lavendar, green, black, and brown pointed ovals all over it and is structured with a couple of diagonal bias strips at the top and some extra triangular panels at the bottom to create flare. I will probably have to copy it as a pattern. 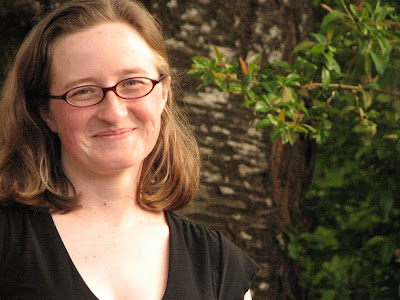 And I included this just because Q's an awesome photographer and I like the composition.
Guess we'll have to start admitting that Monday's on the way!
Posted by Liz at 9:25 PM