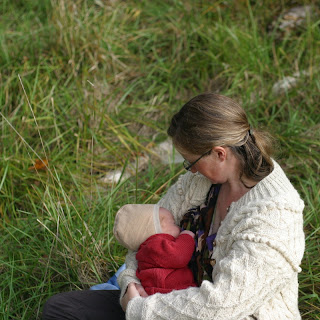 Okay, so until recently I was living in Eugene, OR; which I think many will agree is not "America" per se. In Eugene, if I'd happened to pump and was feeding a bottle in public I wanted to wear a sign assuring everybody that it wasn't formula in the bottle. :)
Once again public breastfeeding is getting some publicity because Beyonce was breastfeeding in a restaurant, which is really the first thing she's ever done that made me have any respect for her. The comments on the facebook post where I first saw the article had a lot of discussion about covering up. Personally, I seriously begin wondering about people. There's a huge baby head covering the "not for magazine covers" bit and it seems like doing something like I did in the photo above is much more subtle than the "hooter hiders" and other such nonsense, which, to me, seem to be around simply to announce "there is a naked boob just under this cloth". I'm all for every woman doing whatever it takes to make her comfortable feeding her baby wherever she may be but I wish every woman could feel confident and comfortable enough to not feel she has to go to such lengths. I also can't imagine Willow's ever increasing volume as I got a contraption like that in place.
One of the other comments in the post linked to this site, which reminded me of some information I'd forgotten since I first read it when Willow was a newborn. Even though the American Academy of Pediatricians (about as mainstream as you can get) recommends breastfeeding through the first year and breastfeeding exclusively for the first 6 months, only about 44% of American infants are still being breastfed at all at 6 months and about 15% are being breastfed exclusively at that age. I can only imagine how difficult pumping is for working moms and I think this probably accounts for some of the statistic; I'm extremely grateful for my situation. Even for me the past six months have not been a fairy tale nursing story. I have had mastitis twice, many sore nipples and plugged ducts and spent the first six weeks of Willow's life dealing with an SNS (supplemental nursing system) and a nipple shield as she learned to nurse. That said, I believe it's one of the greatest gifts I can give her in these early months to set the stage for a healthy life and I've never once even thought of stopping in the last six months.
We starting playing with giving her a few bites of pureed banana and peaches over the last week (she was 6 months old on February 24) but after some initial enthusiasm she hasn't really shown a great deal of interest in more than a couple of bites now and then. Rereading the recommendations, I've been reassured that I shouldn't be feeling this push from some invisible force to try too hard to get her "eating". She's a healthy, chubby baby and we'll just keep playing with food here and there until she's ready to lead the way to more regular forays into solids. I feel like this is really the new frontier of the breastfeeding revolution - continuing past the first few weeks or first couple of months and letting babies get the full benefits that more extended breastfeeding can offer. Who knows, maybe Americans will someday even get to the point where the WHO's recommendation of breastfeeding up to 2 years won't seem unusual and "weird".
So ends the latest rant, which is good because I've got to get an hour or so of sleep before my baby wakes up for one of her nighttime feedings. ;) 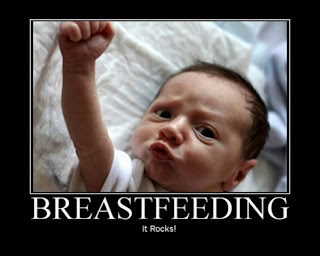 (Pretty much a viral image at this point but I copied this one from here.)
Posted by Liz at 9:11 PM

I generally use the cover in public for other people's comfort and it is another thing to manage. Being a work outside the home mom brings its challenges, luckily I had a supportive work environment to be able to pump on a schedule. With Kara, I stopped producing around 8 mons, and we had been supplementing foR a few months before that, so it was a easy transition. I would have gone for the year if I could- but it was nice to be freed up from pumping, especially at work.

I felt a ton of pressure to get her on solids by 4 months, and I'm glad to have waited to start until 6 mos. Kara never really took to mushed food, and we got the go ahead to get her on table foods ( what we ate) at 9 months. She's been great with foods since.

Good luck with the food adventures!

Thanks for the insights. I have truly wondered how working moms manage.

Glad I'm not the only one who's felt the "she's not on solids yet?!" vibe. I'm happy to hear that you found a way to make it work.

I wonder what adventures await you with Nina. BTW- your latest facebook pics of her are delightful; beautiful baby!

I'm very enjoyed with this blog. Its an insightful topic. It help me greatly to resolve some problems. Its opportunity are very fantastic and working style so speedy.
seo singapore company